You might have noticed that I'm pretty fond of sewing t-shirts and if I can get the chance to cut a stencil and stick something on the front I'm even happier.

And it's June, which means it's the big kid's birthday t-shirt time. 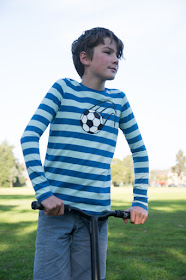 This year he wanted a flying soccer ball. Actually, he wanted a flaming soccer ball but I kind of interpreted that  in my own way which was more monochromatic. And easier to reconcile with my stash of iron on vinyl. I chose iron-on vinyl over fabric paint as the ball had to be white

I really wanted it to be reflective silver, but he vetoed that :( 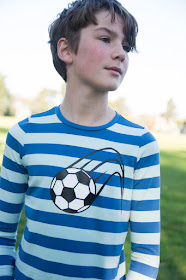 After a bit of dabbling with my friend's Cricut machine last year, I was now going back to my roots and wielding a scalpel.

I downloaded an image, traced it in grey lead pencil, transferred the tracing to the vinyl by rubbing the back, went over the lines to make them clearer, then hand cut it. Once it was cut. it was just a matter of getting all the bits to line up as exactly as possible and then be ironed in place. 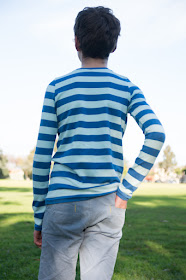 The t-shirt is the Oliver + S School Bus t-shirt. I'm pretty sure it's size 12 as per the recent pyjamas, but I've no idea where I put that tracing, and now I'm wondering if I pulled out the size 10 tracing instead. I need to blog faster or make better contemporaneous sewing notes!

What I do know is that I added about 3" to the length and a whopping 5" to the sleeves! 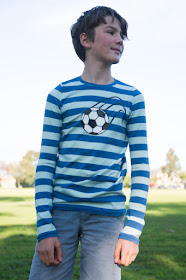 He knew I was going to make him this t-shirt for his birthday although he didn't know which fabric I was going to use. When I found this lovely, soft, cotton lycra in the stash I also found a 1m cut of fabric I'd bought at Spotlight with the intention of making a t-shirt for him.

So I made another. 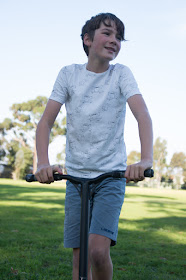 Given how much length I need to add to a sleeve pattern to get long sleeves, I didn't have enough of this fabric. Which is a pity as it's nice and soft too, and would make a lovely winter t-shirt. I have added about 2" to the short sleeve cut line for this version. 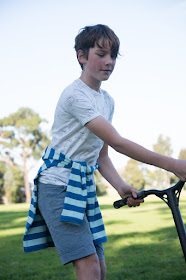 I have been pleasantly surprised by some of Spotlight's printed cotton knits. The quality and designs have really improved over the last few years. Sadly, they're always fairly narrow fabrics compared to the more "usual" 150cm wide European knits. 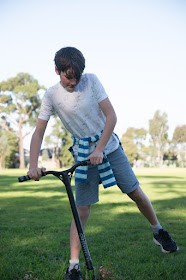 I couldn't pass up skateboarding cacti in sunglasses! 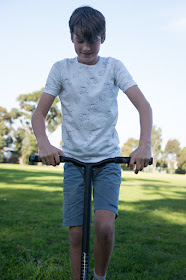 With our dining table, which I normally claim as my sewing table, having to also be a homeschool table, my sewing time has been seriously restricted.

Yet I seem to have had endless hours to crochet pointless critters. Here's our underwater Covid19 critter collection: 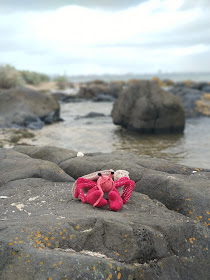 It all started with Hermie the Hermit Crab.

He became our Covid19 Shelter-In-Place mascot. Hermit crabs being very good at that. :) 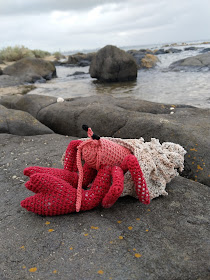 Hermie was made entirely with oddments of yarn that I had lying around. Ages ago my husband's aunt made a crochet blanket for our daughter and she included the yarn leftovers when she posted it (as if, at that time, I might have possessed the skills to make any running repairs! Ha!) 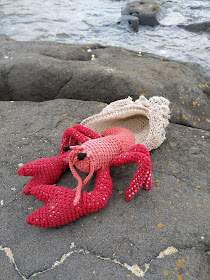 Working with what was to hand, I made his shell out of variegated hemp twine. It was hellish on my hands to crochet but I love the effect as a shell texture/colour. 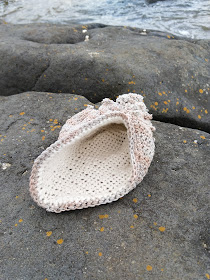 The shell is then "lined" with a cashmere/cotton blend (leftover from the mice). First time around it came out much too small, so i just changed hook size and made it again. That's what you do when you're stuck at hone and your sewing table has been turned into a school desk and you're overseeing spelling and algebra.

It's incredibly snuggly inside and I think any hermit crab would be delighted to call it home. 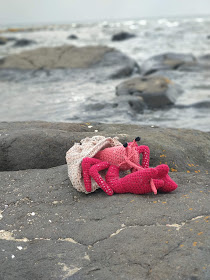 Back in May when we were under stricter lockdown conditions than now, and the only reason we could find to go outdoors was exercise, we took Hermie on a bike ride to the beach.

We snuck him into a musette and took him to the beach for a photoshoot. 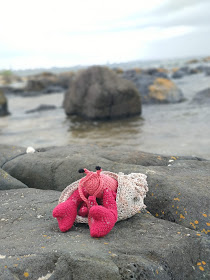 He was a very good model and luckily no seagulls thought him realistic enough to be worth investigating!

Just before homeschool was ending and the kids were looking to go back to "proper" school, P had the assignment of creating a comic strip or stop motion animation. This was Hermie's chance to shine, so P made a series of "Hermie's Adventures" videos.


Here's Hermie checking his CrabSafe app on his mobile device...


And testing the waters as to whether it's time to come out of his shell...


Then Hermie sat on a window ledge and oversaw homeschool/home office for a while.

I crocheted some budgerigars whom you've already met, sewed a couple of shirts and various other things (yet to be blogged)....

Then the pull of the couch and crochet-in-front-of-the-TV drew me back. What's more; now I had all these leftover yarns from the budgerigars to use up, right?! 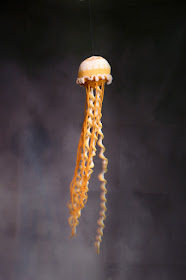 The jellyfish came next. It was a lot of fun to make, but mostly fun to try and photograph in action with his tentacles swirling dangerously... 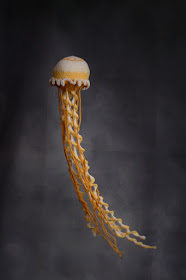 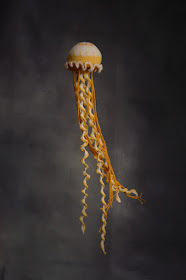 After the jellyfish came an aborted attempt at a seahorse. I think I was misreading the pattern and assuming every round should start with a chain and finish with a slip stitch. Whereas it was, simply, a growing spiral of never ending rounds as per the pattern instructions.

But while I was ripping out the seahorse, I posted Hermie's videos to Instagram and discovered a 4 year old fan of sea creatures and admirer of my crochet. 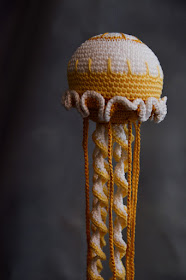 Since I'm all about the making, and never about the having, I new I had a recipient for even more sea creatures. Licence to crochet!!

Next up was Mr Starfish: 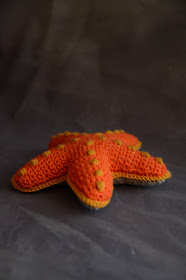 I began with the same mistake I'd been making on the seahorse, but it quickly became apparent that his legs and spots weren't going to line up, so that error was picked up much earlier.

He's made from a mostly swan bill orange (swan reveal pending), with a bit of budgie breast for his underneath and some budgie beak for the highlights. A very satisfying use of remnants. 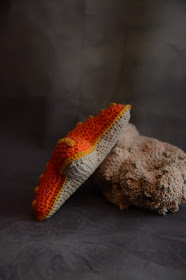 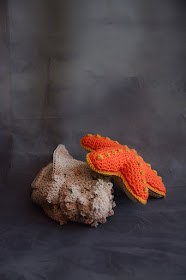 So I posted the starfish and the jellyfish off to my new 4 year old bestie on Monday and they arrived already by Tuesday and it seems he was delighted. Awesome! 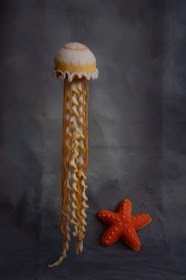 I wish I could say, truthfully, that this was the end of the sea creatures... 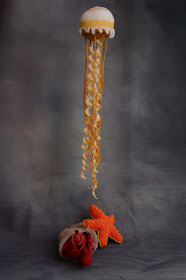 But I can't. Just in the last few nights I've used a bit of budgie purple and the last of that budgie breast to make a sea anemone. Here's his Instagram photo feature as he probably won't warrant a blog photoshoot of his own: 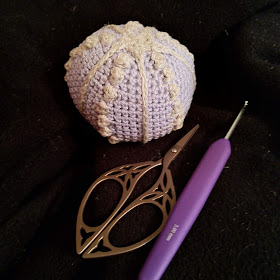 As addictive as this has been. The kids are back at school and I've got plenty of ideas of things I want to sew. I might be returning to the "normality" that is crazy amounts of sewing instead of crocheting sea creatures*.

* Who am I kidding? I mean, have you seen that Octopus? How cool is that?!

A tale of two shirts

It continues to be the best of times for some and the worst of times for others. I'm not going to discuss the situation of racism in our country and the recent manifestations against it, other than to say this: Since the Royal Commission into Aboriginal Deaths in Custody concluded in 1991 we have had 29 years, over 10,000 days, in which to make it clear that the situation is unbearable and must change.
It's not a question of whether protests should go ahead, on a certain day, with Coronavirus restrictions. It's a question of what the hell have we been doing every other day that has allowed the current situation to prevail.

While the real woman behind the sewing alter ego seethes with anger and roils with shame, Lightning McStitch is now going to blather on about sewing some shirts... 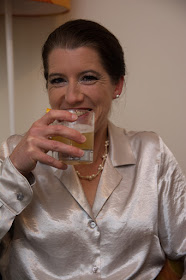 When Coronavirus lockdowns first started happening there were plenty of Frocktails events that had to be cancelled.

Our compatriots up in Sydney joined forces with a few of the US Frocktails events and hosted a virtual frocktails event in lieu of their planned parties.

I'd suddenly been consumed with the urge to sew myself some button up shirts and thought I'd try out both the Liesl + Co Camp Shirt and the Classic Shirt. I've already sewn the Recital Shirt (both ways) and love it. I was curious to see how these two would compare. 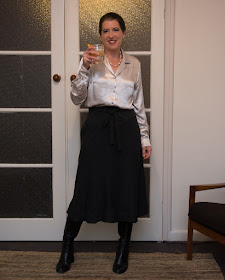 For my virtual Frocktails outfit I sewed the Camp Shirt in this metallic coated cotton that I'd picked up in ClearIt some time earlier. I'd had it earmarked for a different pattern (V1414), but that one would have the reverse side show, and the fabric is a very dull beige on the back.

I thought the lux pyjama vibe of the Camp shirt in this fabric would be fun. An old friend described this look as "pissy rich 70's housewife" which cracked me up. But having always wanted to dress up as Margo Leadbetter from The Good Life I was also delighted (for the record I wanted to be Barbara with all the chickens and goats but I wanted to dress up like Margo)

She was on the money with the 70's comment as the skirt pattern is a 70's original. I still need to hand sew a hook and eye at the back and close the belt properly, and it deserves a blog post of it's own come summer time. 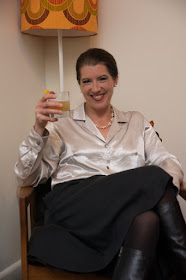 The Camp Shirt turned out to be perfect for this fabric with its relaxed, one piece collar. It's much more a blouse than a shirt and I've been wearing it with jeans and it works just fine like that too.

It's a straight size 10 as per my measurements with no alterations. Amazingly I had he perfect buttons in my stash, even with slightly smaller ones for the sleeve plackets.

The Classic Shirt lay cut out for quite some time, and then for some time afterwards was sewn, but was waiting for buttons... 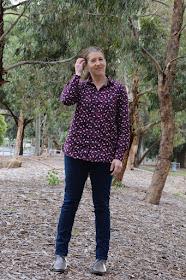 This was a cotton/poplin that I'd bought at Rathdowne Fabrics ages ago with probably the intention for it to one day become a shirt. I'm not sure if I'd thought that would be for me, as I never usually wear purple, but suddenly there it was, also cut out, and ready to be my Classic Shirt.

Again I made a straight size 10, but something possessed me to lower the bust dart by half an inch on this shirt (but not the other?!). I think I must have been wearing my Gelato Blouse which does seem to have an oddly high bust dart compared to other Liesl + Co patterns. Either that or I was just feeling a bit old and saggy and figured I might need to start making some kind of sewing concessions for my boobs... I don't know. But I needn't have done it. The bust dart is under the chest pockets so it doesn't matter that it's too low, but it is. It should be 1/2" higher, or exactly where it was before I moved it. 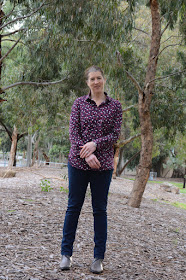 I'm keen to track down a nice, textured white cotton and make the perfect white shirt. I think it would be the front and collar of this shirt with the more fitted back of the Recital Shirt. It's cool that the pattern pieces are interchangeable in that way.

Doing business through the postal service during lockdown, I bought the perfect buttons from Buttonmania. Square purple buttons (not something I had in my stash!), with smaller round ones for the sleeve plackets. 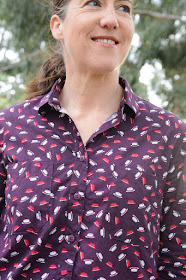