That quilted laminate fleecy stuff that P wanted me to carpet the entire house in... Well it was intended for a coat for A. She spied it when we were at The Fabric Store together and it was on sale, and it was winter, and the girl can always use a new coat. Needless to say it found it's way into our bag. 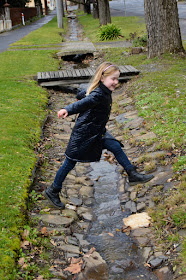 Obviously, this was going to be the perfect fabric for an unlined coat, as the fleece-y inner surface was it's own, ideal lining.

In my Japanese pattern books I have lots of nice coat options for unlined coats, and as she's in danger of outgrowing quite a few of those very books, that was were I headed in search of a pattern.

After making P's vest I had decided that the only way to finish this coat would be to sew flat felled seams everywhere, so I traced off the size 130cm and added a 5/8th seam allowance wherever there would normally only be a 1cm seam allowance.

And then the nightmare began... 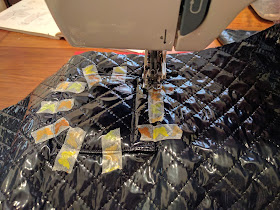 Firstly, the laminate, plasticky nature of the "fabric" (I use the term loosely) resisted pinning and was as tacky as all get out for the pressure foot.

I used my walking foot and taped things in place with washi tape. Of course I couldn't iron this stuff either for fear of a melted, gooey plastic mess. The pockets were turned using the Oliver + S trick of  finger pressing with a basting stitch at the fold line and a gathering stitch within any curved seam allowance. 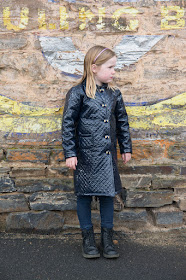 Tiny, curved pockets checked off I moved on to constructing the garment. As all of the seams were sewn wrong sides together first, I would end up with sticky plastic surfaces both top and bottom. I used crepe streamers (all I had) underneath and Washi tape on top to try and keep things sliding along. Oh, and clips to hold it together. 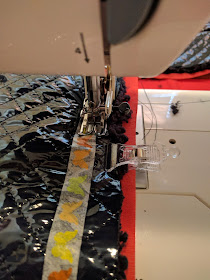 Then I would trim one side of the seam allowance... 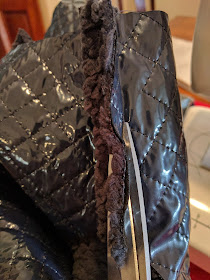 Then unpick all the quilting from the untrimmed seam allowance... 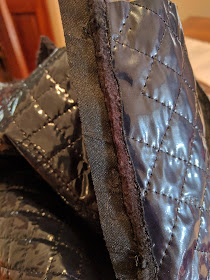 And then wrap that over the seam allowances and stitch it down to get my flat felled seam... 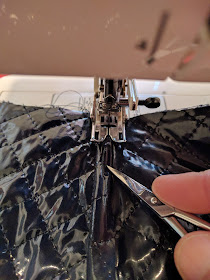 Not so difficult when you're sewing nice short seam like shoulder seams. Inserting the sleeves flat wasn't so hard either. Neither was sewing the body part of the side seams. But the sleeve seams?... OMFG, what a task I had set for myself.

Let's have another photo that shows I did get there in the end, while I take a few more deep breaths... 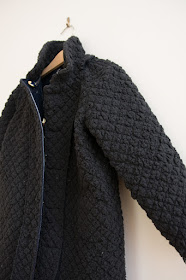 I flat felled up the body side seam and as far as I could possibly go down into the sleeve. I was sewing about three stitches at a time, pushing, cajoling and shoving the sticky fabric under the pressure foot in order to sew just another two stitches. More rearranging, more pushing, another two stitches. The sewing machine was being forced across the table and the plastic fabric was bunching dangerously close to the heat of the sewing machine's light globe - which was not, of course, helping to illuminate the tiny dark hole into which I was trying to sew. Another two stitches and there was no chance of going any further.

No fear, I thought, I'll simply start from the cuff end and sew up to where I stopped.

The whole process of push, swear, stitch, repeat was continued in the opposite direction until it was plainly clear I could proceed no further in that direction either. 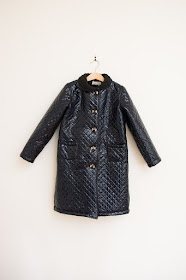 I reached for extra Washi tape and some strong liquor at this point. Taping up the whole tacky surface of the seam I switched back to the normal presser foot. Less forward movement but much less bulk and I was able to continue the push, shove, few stitches pattern of glacial sewing until I'd breached that three inch gap.

And then I had to repeat the whole process with the second side seam and sleeve seam.

Finally though, the insides were looking as good as they should. There really was no other way this coat could have been made. 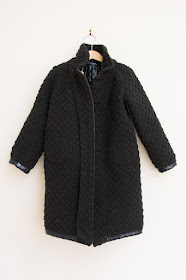 By now I was ready for a breather, so I took a day trip (oh why did they have to leave the city) out to Buttonmania. 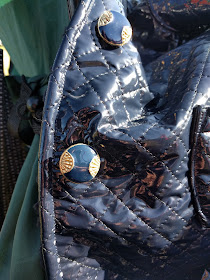 It's never a wasted journey though, and of course I found the perfect buttons. An affordable, shiny, navy, plastic button with just enough blingy gold to make it fancy.

With renewed vigor, I sewed the collar (simply using the fabric the other way out), added the facing (also inside out to keep the insides all fleecy), threw on a cotton tape label and hanging loop and it was nearly done. 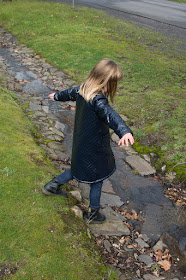 Pleasingly, the buttonhole foot on my machine has it's own little teflon-esque "slippers" and so it found the tacky surface easy going. The buttonholes were added, buttons sewn on and hems completed. Just in time for a freezing cold visit to the country to see my folks. 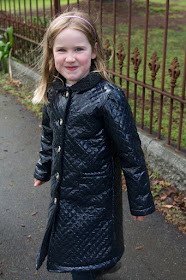 For all that work, I was flying by the seat of my pants and there was no muslin or checking of fit. You can imagine my delight when it turned out to be just right, and of course when it was received with utter delight from the girl whose favourable opinion is never guaranteed.

And I'm very happy to say that after carefully cutting the jacket and vest from the 1.5m I bought, there are NO leftovers. That's an expletively-laden good thing as there is no way in hell I'd be going back for another round of that. 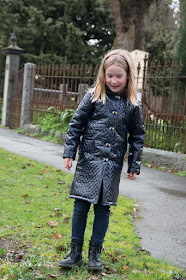 Details:
Pattern: Coat "t" from Girls Lovely Clothes by Yuki Araki (ISBN-10: 4529045269)
Size: 130cm
Mods: Increased seam allowance to flat fell seams. Made up my own button spacing/number. Pattern had 7 or maybe 8 tightly spaced buttons on this size coat.
Fabric: fleece backed, quilted, plastic laminate from The Fabric Store
Notions: buttons from Buttonmania, rolls and rolls of Washi Tape, Clover wonder clips, crepe paper, sweat and alcohol (no tears, I was laughing too much at my ambitious foolhardiness to cry)
Verdict: there's a reason coats like this cost a fortune.  Hand-me-down requests will be taken in order of application :)
Lightning McStitch at 22:03
Share