My biggest, little baby is about to outgrow one of my all time favourite patterns. I had to be sure to sew it for him one last time... 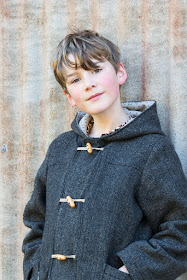 The Oliver + S School Days Coat was the first coat pattern I ever sewed and, the first thing I made that I would show off to anyone who came to visit our house. A blog post with the first 4 of them all in one place is here.

The pattern ends at size 8 and I knew my newly 9 year old would be fine with the width and body fit, just needed to remember those monkey arms. (2&1/2" extra length - seriously!) 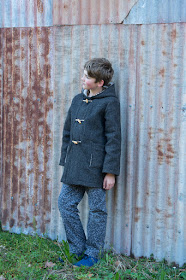 I had thought I could make it with the wool leftover from my Lisette coat, but no matter how I tried it was not going to fit. I pondered the idea of a Dolly-esque Coat of Many Colours using various wool scraps, but then found I had more than enough of this fabulous double sided wool I'd used for my mum's cape.

I'd been hoarding the wool waiting for a pattern (for kid sized remnants) that would show both faces, but that didn't seem likely to happen so it was time to cut and use it up. This face is a lovely, soft, almost cotton cloud-y feel with a dark grey and fawn melange. The opposite face is like a flannel weave and is all tan. It's not too thick to sew and delightfully warm to wear. 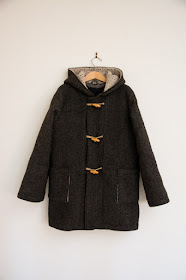 I'd cut all of the lining pattern pieces out of my coats leftover lining when it occurred to me there's no reason why the hood and pockets should be slippery lining. Why not make them something snuggly too... A bit of my leftover Maille Merveilleuse suited the colours of the wool perfectly. This is a cotton knit that is thick and fluffy. Technically not a fleece, or a loopback terry, it's hard to describe other than to say it's fabulous. 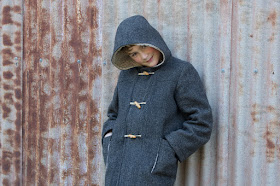 He's pretty happy with the choice of hood and pocket fabric!

As I have done before I added a hanging loop under a little label. The hanging loop was made with a turned tube of bias cut linen and the label was one that was posted to me by someone lovely but I may have forgotten who (apologies) 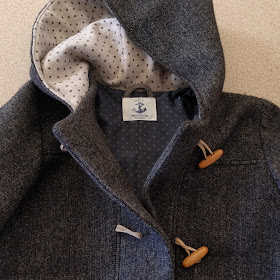 This photo was taken just before I added some press studs into the plackets and then topstitched them closed. Previously I've used magnetic snaps, but I was running with what I had on hand for this coat. I was careful to interface everything where the press studs were applied. Hopefully pulling them apart won't damage the wool... 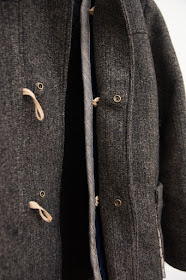 At the time of cutting this coat I was also cutting a coat for A using a pre-quilted fabric with a laminate outer face and very soft, fluffy inner face. Would P like the leftovers for the optional vest that is included with the pattern? The answer was a resounding yes (actually he wanted me to cover the floor and walls in his room in that quilted fabric!)

So he got the vest as well. I've never yet made the version with sleeves as it just doesn't get cold enough here to warrant it. 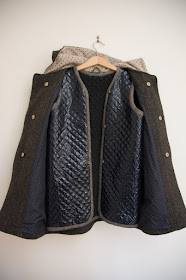 I've used hair tie elastic as my little loops on the vest which attach to buttons sewn into the jacket. I was feeling terribly clever until I realised that by putting the back neck elastic loop dead centre it would mean the button had to be sewn on top of my lovely label. Doh! 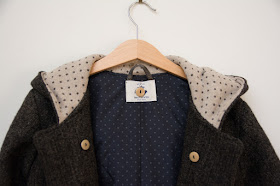 Making the vest out of prequilted fabric made it a super quick addition to the coat. Previously I've done all the quilting myself then cut the vest from the quilted fabric. When that step is done it's simply two shoulder seams and a full perimeter of bias binding.

I wanted to finish the shoulder seams nicely so there was no raw edges, so I flat felled the seam. Very easily done on a short, straight seam and I was encouraged enough to decide that A's whole coat using that fabric should be flat felled at every seam. We'll talk more about that decision in another blog post! ;) 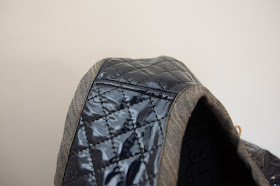 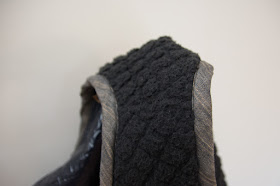 If he thought the hood and pockets felt good he was ecstatic about the vest! I doubt it will ever be worn without the vest inside. 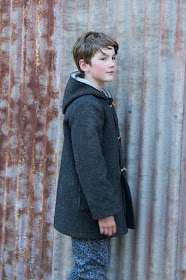 I learned from my first version of this coat not to use leather thonging for the toggles. Kids fiddle and twist them and the leather breaks. The stuff to use is a flat woven cord. Years earlier when I'd bought some blue wool melton with this coat in mind I had also bought some tan cord and pale wood toggles. That blue wool ended up being last years Lars coat (bit small then, way too small now and has been posted off to my little Euro nephew). So these toggles and cord were also marinating in the stash. 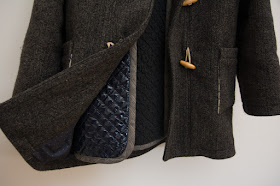 One of the only things that irks me is how, no matter how carefully you turn the pocket lining, it is still visible once the patch pockets are stitched on. I would almost consider cutting the lining smaller and creating little mitred corners so there's a 1/4" of so of outer fabric turned under. That way the pocket edge wouldn't be so visible. It would increase the fiddle factor of the pockets enormously though.

Once all the fabric is cut, the coat sews up quite quickly and the result is certainly impressive enough to make it worth the effort. It is an absolute delight to sew, and when you can construct it entirely out of stashed leftovers and notions it's immensely satisfying! 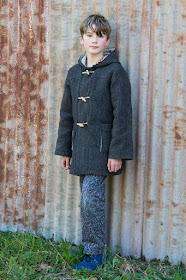 It's just so sad that he's going to graduate out of this pattern by next year. Sniff.

Details:
Pattern: Oliver + S School Days Coat
Size: 8, only size alteration was additional 2 & 1/2 inches of sleeve length
Sewing mods: Press studs instead of sew in snaps.
Fabrics and notions all from out of the shed.
Lightning McStitch at 23:27
Share