Some days the boredom is indescribable. The weather has turned cold and miserable and we're all locked indoors. As we have been for months. It's school holidays but that looks just like school days except there's no incentive at all for the kids to get out of their pyjamas...

On a long list of non events was the reason for this dress (last year's link here). I felt like not sharing it here in case an opportunity for the event arose later, but honestly it won't fit for that long. Who knows when "later" will be. So bored.

Anyways, here's Goldilocks! (and there's a huge pile of unsewn bear fleece in the stash ready for a post-Covid world) 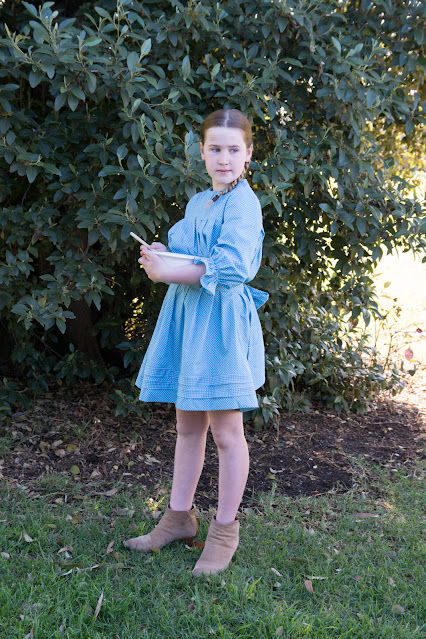 She absolutely insisted on wearing my boots for this photoshoot and since I never thought she would wear the dress I consented. They're far too big, but I've been told when I've "grown out of them" they're hers. 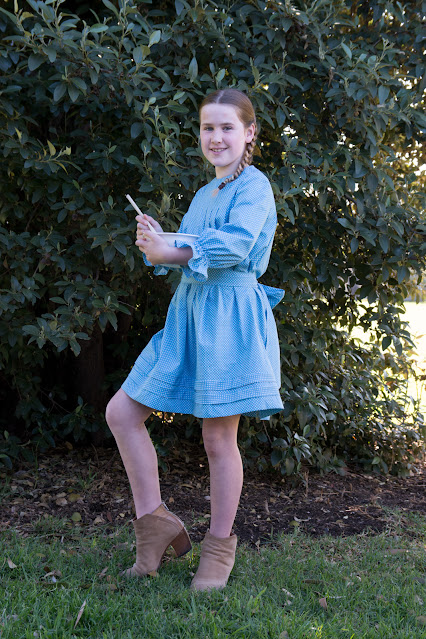 This year was to be A's first Roobaix and a full family affair, so our costumes were chosen: Goldilocks and the three bears. The Roobaix was meant to be in June, and briefly, June was looking like a good month. We got out to the country for a weekend and saw my parents. I bought the fabric I needed for our costumes. Then, suddenly we were all sent  back into a long, long locked down winter.
By the time we can leave our small 5km radius and ride some of Melburn's cobbles it will probably be far too hot for bear suits. 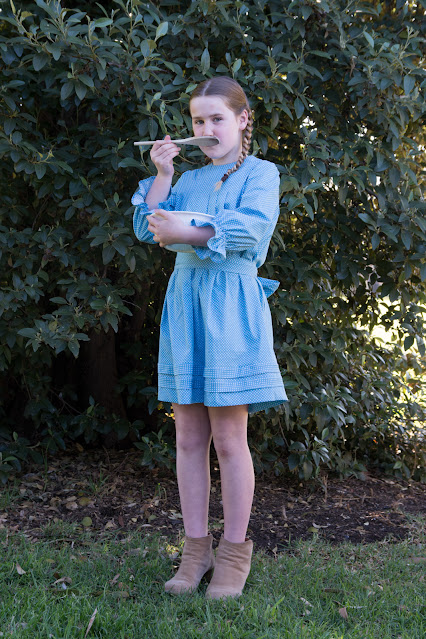 I'd traced off the bear suits, but the only cutting I had got around to was this dress. I detest having unfinished things lying around so once something is cut, it gets sewn. And hey, I've inadvertently joined in with a hashtag - Sew Vintage in September, as well as the Sewing Pattern Review current costume competition.
The pattern is a one size (size 10) retro number from Simplicity. 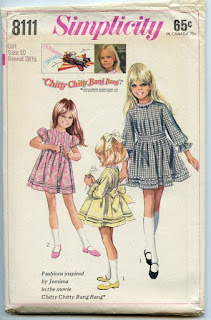 My copy has the surname of one of my aunts scribbled on it, so I'm guessing my poor cousin Narelle had to wear this first time around. I'd love to see a photo of that.
I gave A free rummage through all my patterns to pick what she thought would be most Goldilocks like and this was her pick. 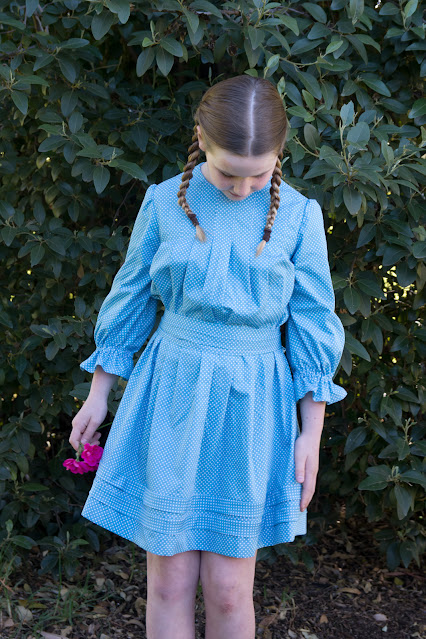 The fabric is just a poplin from Spotlight, and so was perfectly pleasant to sew. I appreciated the pattern's technique for the pleated neckline. The pattern is cut out with a square top. The pleats are sewn, and then a neckline/armhole template is used to shape the top part of the pattern.
The hemline looks growth pleats but are actually folded bias strips stitched in place. The resultant length is quiet retro (read short) and between that  and the well fitted bodice it's certainly true to size and probably short lived. 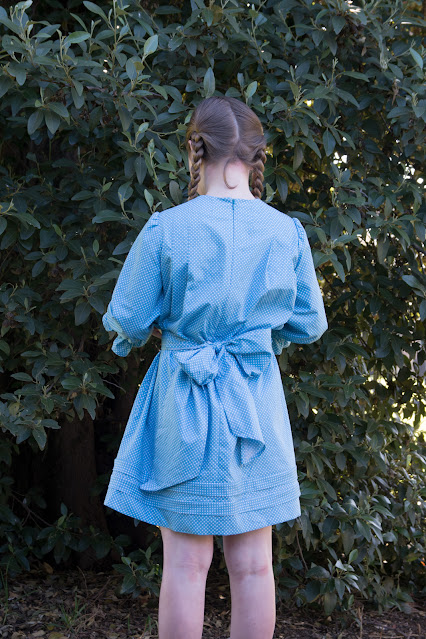 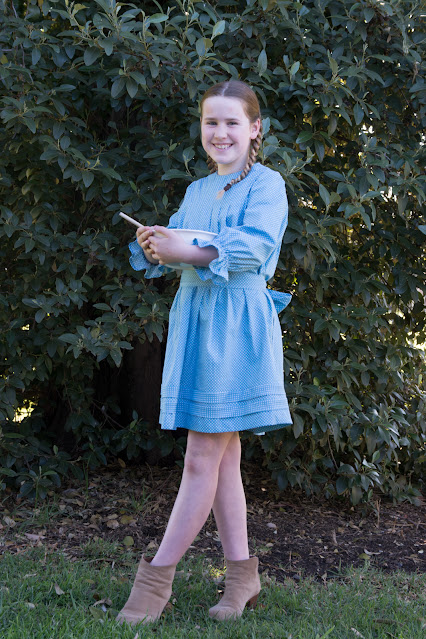 A porridge bowl and wooden spoon was as far as our props imagination went, and is enough of a nod to our titular character, no?
She surprised me by wearing the dress on a few occasions (when it was sunnier) after this photoshoot. Funny what they take to. I had no hopes for this to be anything but a one off costume. 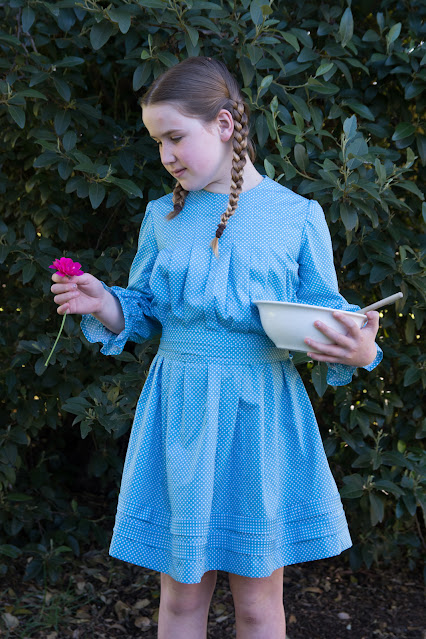 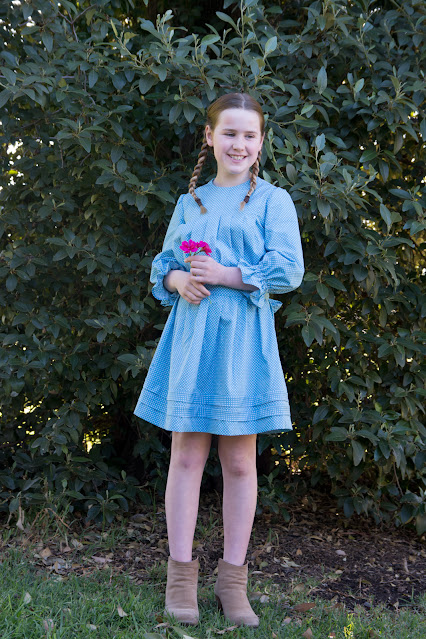 Hopefully we'll get a Goldilocks day for the Roobaix some time soon - not too hot, not too cold, not too windy, and the freedom to find some cobbles outside our own little neighbourhood.

I've had the Megan Nielsen Dawn Jeans pattern for so long now, and I finally thought to have a go at making a pair for myself....

There was some black, heavy, rigid denim out for another make which I'll share soon and so I decided it was time to trace off and cut out some jeans. At $4/m from Eliza's I had nothing to lose. Based on measurements I chose a size 10 waist blending out to 12 from the hips down.

And initially they were looking good: 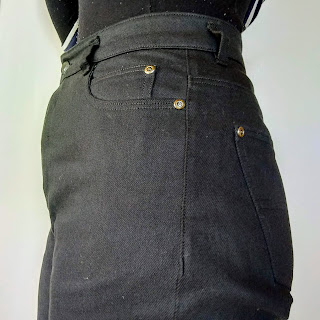 But they were so short! I hadn't paid a lot of attention to the inseam length, but just gone for the "regular" length cutting line. I figured at 170cm (5'7") I was pretty "regular". 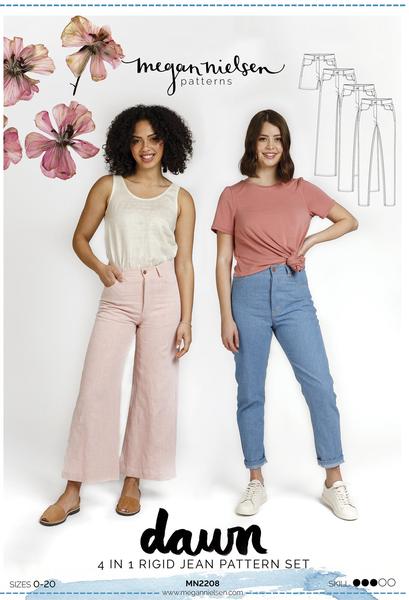 I tried adding a cuff of denim to the bottom, but that looked daft, and they were still at least two inches too short. So I cut the cuff off, narrowed the leg to be more tapered and then single fold hemmed them again. The end result is only half an inch shorter than the "regular" length would be on me, and seriously, wtf are these if not cropped?! 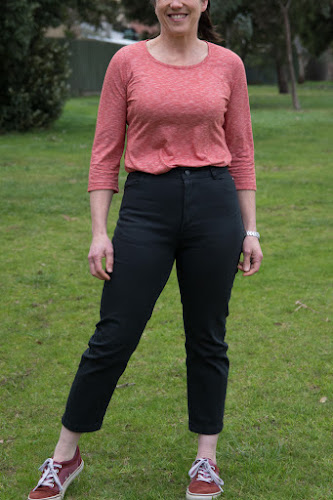 The other changes that I'd made during construction was to take the centre back seam in by 3/8" from just below where the yoke attaches. That reduced the waist measurement by 3/4" yet the waistband was too short.
I went back to my traced off pattern piece and checked I'd cut correctly, yep. Then I checked my pattern piece against the original pattern, all correct.
The discrepancy appeared to be entirely on one side of the front. If I matched the side seams and notches it was all fine from one front edge all the way round the back to the opposite side seam. Then I was missing about an inch and half between that side seam and the centre front. Bizarre.
Given that I'd taken a decent wedge out of the centre back, and I don't mind the idea of easing the pants onto a shorter waistband, I just ignored the notches and ploughed on.
I fully understand the concept of easing trousers onto a smaller waistband, but this was not that. Either I'd constructed the fly incorrectly (and I don't see how I could have) or the waistband pattern piece was in error. 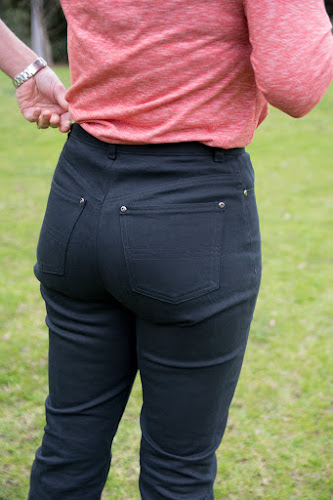 From the photo above you can see how much droopy/gathered fabric there would have been in the back yoke if I'd left the centre seam alone. As it is I need to take some height out to get rid of that horizontal wrinkle.
And then I wondered what I could do about the horizontal wrinkles on the backs of my upper thighs.. 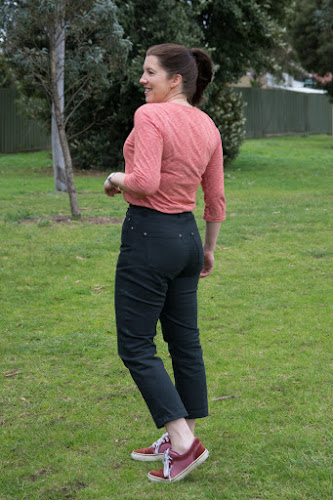 I read some handy tips on Sewing Pattern Review that this might be due to the crotch curve pushing the upper leg down, and sure enough, if I pull up on the centre back waistband the wrinkles disappear.
So for my second pair I tried an adjustment to the lower seat curve where I cut a deeper curve and then added that fabric back on at the side seam. I only made about a 1/4" adjustment.
I also then tried taking a little pinch more of length out of the upper back leg so that they would have to be stretched slightly when pinned to the front leg. I'm not entirely sure I achieved anything... 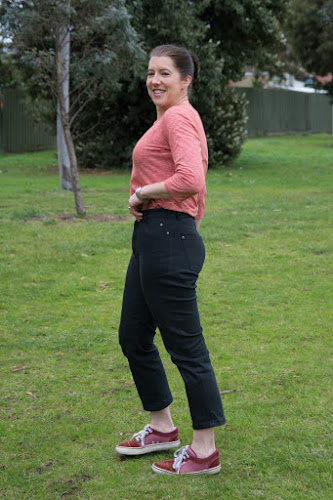 I've tried wearing this first pair as they really are very comfortable and feel like nice jeans to wear for a day, but the length is just stupid. If it's warm enough to wear cropped pants and have flat shoes and ankles on display, then it's too warm for heavy, rigid, black denim.
I have a shorter friend in mind that they might fit. Otherwise I don't know what I'll do. I'm definitely not one for tight fitting denim shorts. Eeek.
So muslin number 2: Some tweaks to crotch and upper back thigh length. The same centre back chunk removed. The same this-waistband-doesn't-fit-but-I'm-going-to-make-it moment. A bit of width added to the front upper thigh, and then sewn with a smaller front seam allowance over the upper thigh, trying to get that side seam vertical. And finally, an additional 3" of extra length.
And I still think they're too short! 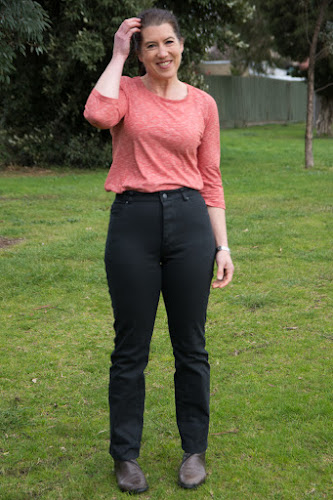 Maybe I'm weirdly old fashioned, but I think jeans should at the very least touch the tops of my shoes. I'd actually prefer them to rest there slightly with a little fold, or quarter break
I looked up the description of trouser length and found this handy descriptor of no break, quarter break, half break and full break... I hemmed these jeans by only a single 1/2" fold, so they're effectively 3&1/2" longer than the drafted "regular" length. I'd want at least another half inch, so I figure I need to add 5" to be able to hem them as per the instructions with the option of trimming a little off. That's bonkers!! 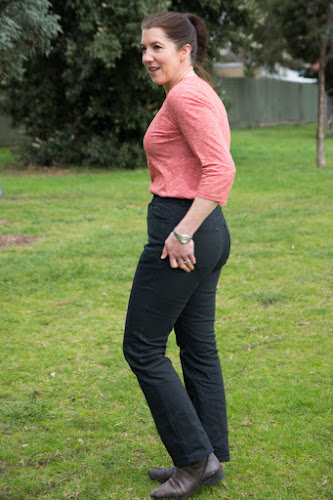 I don't think I had much effect on those back thigh wrinkles after all. 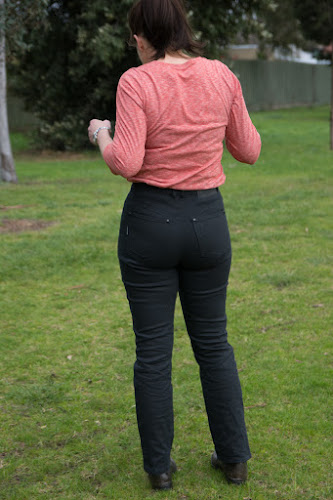 But I did have a bit of fun with this second pair using all black thread and black hardware. I had some great matte black jeans buttons from Buttonmania, and then bought some black rivets from MRecht.
There's some detailed pocket stitching and I even embossed a little Kraft-Tex jeans patch with my blog logo. Initially i'd drawn it with a silver fabric pain pen but it was way too bright so I simply flipped it over and pressed the logo into the other wide by tracing over a printed copy with a ballpoint pen and pressing really hard.
It looked cool, but has all but vanished after the first wash. 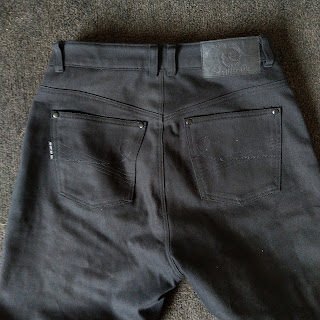 So... If, and it's a very big if, I could be bothered with a round 3:
I'd leave the front crotch the same,
Narrow and shorten the back centre waist
Take even more out of the lower crotch and add it back to the outer thigh.
Add more again to the front thigh
Maybe make the thighs a good bit wider all round and give myself a slacker cut
Add a bucket load of length 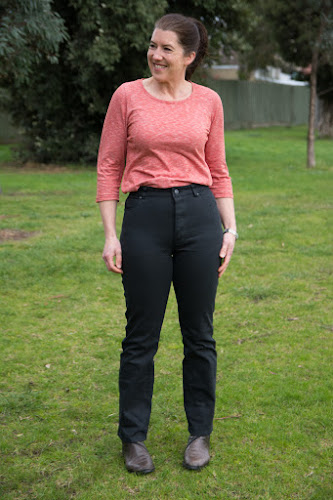 I have other rigid denim fabrics in my stash, but I also have a lot of other pants patterns that could make jeans.
As much as I feel like I may just be getting somewhere with this one, I wonder if starting over somewhere else may not work just as well. It would certainly be more interesting.
Lightning McStitch at 21:35 9 comments:
Share
‹
›
Home
View web version