This was the November instalment in my year of making a gift for a (semi)stranger (Secret Valentine Exchange in hiatus). I misjudged just how long it takes to get something from one side of our country to the other, foolishly thinking it would be less time than it took to send something to Canada. Wrong.

Anyway, I've heard it arrived yesterday so I can share here...
Let's start with the first prototype - the one my gift recipient didn't receive.
I'm working on the blog-proven premise that everything looks better on my son, hence the cool model. 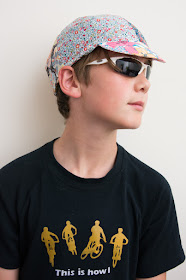 Back in my original callout for suggestions Tracey asked for a cycling cap. Something to wear under her helmet to keep the harsh W.A sun out of her eyes and off her head.

I have no experience with wearing or sewing cycling caps. They've never been part of the cycling tenue at our house. But it seemed like a fun and worthy project, and one day, when the older bloke decides he is thinning on top sufficiently to need a cycling cap, I'll be ready!

I started with a search for an online pattern. I found this one via Flickr but there's no way those dimensions were correct. I couldn't print it such that the written measurements would match the actual pattern pieces. But in the comments was a link to a printable PDF version that was slightly modified, so that became my launching point. 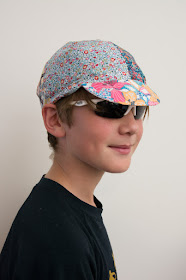 The pattern has four panels, each with a dart, then the brim attached.
I knew it was going to be a summer time hat, not a warm winter thing with ear covers, so I thought why not use some pretty Liberty of London fabrics.

I meticulously french seamed both my darts and my 1/4" panel seams so it would be gorgeously neat on the inside. 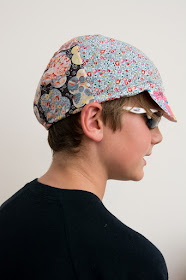 I added a KATM label with Bespoke on it, but forget to heat seal the cut ends of the label, so after stitching it into my tiny french seam it did pull out a bit and look like it might come out. I simply stitched around the other three edges to secure it and it was good.

The brim on this one is just a single layer of the plastic from a 2L milk carton.

You can wear it turned up for full visibility... 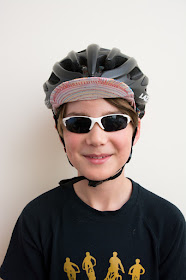 Or flipped down to keep the sun out of your eyes... 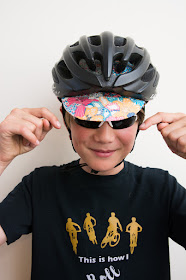 I didn't follow any instructions to construct the cap as it all seemed pretty self-explanatory. After basting the brim to the cap I then made a strip of pink cotton/lycra knit binding to finish the inside of the cap all around. I made the binding smaller than the cap so it would be stretched a bit to fit, but also added a short section of elastic at the back inside the binding for further gathering.

Here's where I made a Secret Valentine Exchange rookie error - I'd failed to do my research on my giftee. The hat was OK, it was perhaps a little bigger than I'd wanted it to be. The plastic of the brim threatened to be a little sharp at the edges. But it was beautifully made and looked super cool with six different Liberty fabrics.

In looking up Tracey again on Instagram to ask for her address I found an old conversation we had through direct messaging about women's cycling clothes. It ended with the line "... and I hate pink"

Time to make another hat and fix the little niggly bits and ditch the pink! 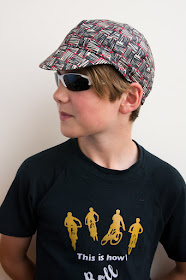 This one is also a Liberty of London fabric and one of the only Liberty fabrics that I'd ever get excited about myself (not a fan of pink or florals either!)

I took about 3/4" off the bottom of each panel so that the crown was less deep. I added about that much to each side of the brim to give it a more gentle and wider attachment and I covered the milk bottle plastic in a layer each side of that interfacing that looks like paper felt. It softens the plastic a little and protects the fine fabric from the sharp, plastic edges. 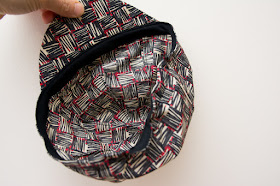 I still French seamed all the darts and seams, and this time I reached beyond what was immediately next to me and sought out some black knit for the binding.

I didn't have another Bespoke label, but a One of a Kind label seemed equally appropriate. 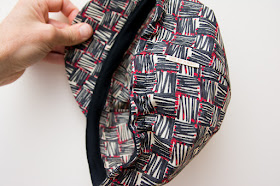 I'm pretty happy with this one and I hope it suits Tracey's bike style and keeps the sun and magpies off her face for many rides to come.