When we were on holidays in April I dropped into a beautiful string shop: String Harvest.

Some cotton rope and linen/silk twine became my souvenirs from out beach holiday! 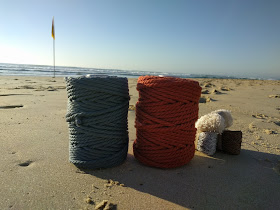 I was thinking of trying to make a rope bowl or basket by using the twine to crochet over the rope. I dabbled in some crochet with my hemp twine bowl first and then sought out some tutorials for crochet over rope.

There are plenty of online tutorials but they all tend to dictate a pattern which requires counting stitches and knowing what you're doing. Completely contrary to how I approach any other craft task I seem to be a freestyle crochet type. By that, I guess I mean I can do a stitch but I don't know what it's called or how to read a pattern. 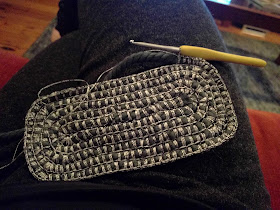 An extra stitch or two at each corner allows the rectangle to form with nice rounded corners. 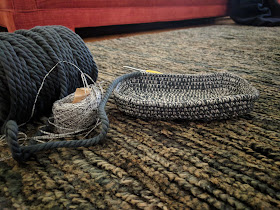 To create the angle between base and sides it was simply a matter of skipping a stitch every 4 or stitches. The sudden reduction in stitches gives the increased tightness that pulls the rope in and creates the sides.

Once I was happy with the depth - I was going for something shaped a bit like a small loaf pan - I made some handles. This was done by simply continuing to crochet over the rope but not catching the underneath crochet in each stitch. 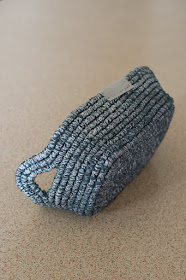 Since it's essentially a coil pot it has a certain uneven wonkiness that I'm calling charming rather than wonky. Where the rope finishes I covered it with a little tab of Kraft-tex paper which I punched holes in with an awl and then stitched on with the Habu linen paper/silk thread. 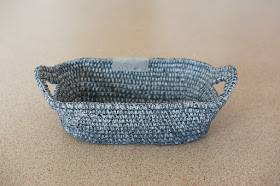 That stitching was the only thing that the Habu thread really was not suited to. In trying to stitch with it, the thin, black silk thread that is wound randomly around the flat, linen tape just gets pushed into a big bunchy knot. It was necessary to have the holes in the Kraft-tex quite large and to make sure I went through the more open parts of the basket rather than trying to stitch through the cotton rope itself. 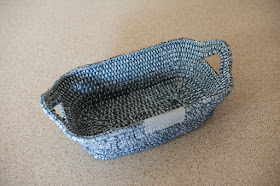 I looked again at purchasing some spray starch but baulked at the fact that it only seemed to come in a single use aerosol can. While I'm quite happy to create probably unnecssary crochet rope baskets I have a strong hatred of unnecessary packaging in general!

Instead I mixed some cornflour with hot water, stirred most of the lumps out then squeezed it through a bit of muslin to get a nice starch solution. I added a few drops of an essential oil (labelled as toilet room freshener but definitely the same thing!) in the hope it wouldn't end up smelling like a musty pancake with the cornflour starch. Dunked the whole thing then left it to dry in front of the heater. 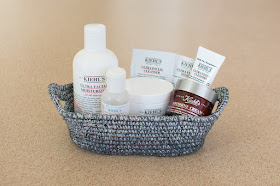 I think it makes a nice little bathroom basket and if my mum didn't have such expensive taste in handsoaps I would have filled it for her and gifted it filled. As it was I photographed it with a few of my things in it, then took them out and put chocolates in it instead!

I still have lots of rope left over and next time I feel like tinkering I think I'll try the sewing machine zig zag version of a rope bowl.