Winter Coat: Lisette for Butterick B6423

We've had a few days of lovely spring like weather and it seems like winter may be receding. I know I still haven't uploaded those winter cycling patterns for you yet, but I did squeeze in some late winter sewing for myself.

A new coat for me. Lisette for Butterick B6423 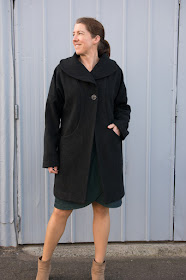 I measured between sizes and went down as I figured that "boxy, loose fitting" would let me off lightly if I'd gone too small. I kind of knew that the bottom section was the narrowest point and since that's not the case with my body I toyed with the idea of blending out to the next size around the hips. Laziness won out and I just made a straight size M (largest size in the smaller size range pattern packet). 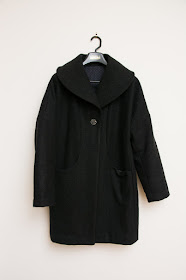 Apart from laziness, the other reason I dived straight in without even a tissue fit was that I was using some super cheap wool coating that I'd picked up at Eliza fabrics last year. I had fully intended to use it for a different Lisette coat, but that one has the reverse side of the fabric showing. This fabric has a flat, wool melton type face on one side, and then a weird, fuzzy brushed face on the reverse. It was going to look as cheap as it was if that side showed. The lined B6423 pattern was a much better match.

Sticking with the cheap-as theme I found a nylon lining at ClearIt. The wool coating is essentially black with tiny bits of green fibres in it - giving it a kind of licorice look. The lining is a dark charcoal with small greeny-sage-grey spots. They complement each other perfectly and the total fabric cost for the coat was probably $35 at most. 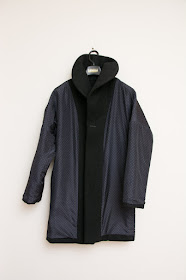 I've been wearing this coat quite a bit since I finished it, and there's bits I love, and aspects I'm not so fond of...

Over the last few winters I've made cape style coats which have made it very hard to carry a shoulder style bag. This one gets the bag carrying tick of approval. The single button closure, which I thought would lead to insufficient coverage, turns out to not only be enough of a closure, but makes it a great coat for biking in.

And those curved, front seams with pockets. I adore them. 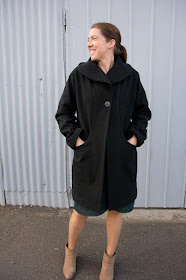 You see, even after it's been steam pressed into submission, that under collar cannot help but roll back out and peek at the world. 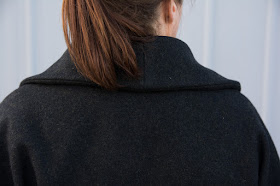 That is it looking as turned under as possible. A few hours later with lots of wear and movement, it's even worse. If I can be bothered, I might spend an evening on the couch invisibly hand stitching the under collar to the underneath of the upper collar. But, if you're about to cut this coat out - my advice is to reduce the under collar perimeter. 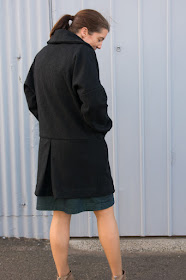 The kick pleat doesn't entirely behave in such a thick wool, either. Which brings me to Step 36 of the instructions. It's something to do with finishing the pleat, but I'm afraid I. have. not. got. a. single. clue.

If you found this blog post by typing B6423 Step 36 WTF? into a search engine then I apologise for disappointing you. Apart from Liesl Gibson's version, I could only find one other made version of this coat on the internet (lovely version by Calcedonia) and she confessed to having bagged the lining and not followed the instructions.

So I emailed Liesl.... Amusingly she didn't have a clue either. It must have made sense at the time she said, but she proofreads the instructions so long after creating the pattern that it all seems a disconnect, and she had, of course bagged the lining and not followed the instructions when she made her version either. 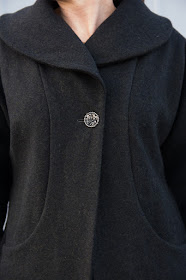 The other thing I was tempted to do was follow Liesl's example and sew a bound buttonhole, but that laziness gene was expressing itself strongly and a machine sewn buttonhole won out. My machine makes nice manual, 4 step buttonholes and in thick fabric like this I oversew them again with a zig zag stitch. The button is from my stash via Buttonmania and was one of the ones deemed too big for A's recent Sunday Brunch Jacket - but just perfect here.

Apart from the elusive Step 36 (which I just ignored) the instructions were very clear and the pattern came together perfectly with notches lining up just exactly as they should. This is important as the shoulder/neckline is constructed with one of those 90 degree pivots. This time last year I was moaning about a shonky indie pattern that expected that to happen with no markings on the pattern and pattern pieces that barely fitted together. Here was the same manoeuvre but made a thousand times neater and easier by virtue of being well drafted and clearly marked. 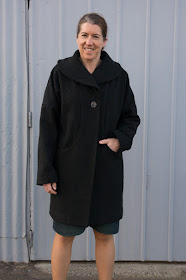 The final verdict is a definite thumbs up with the following caveats: Size down a little, blend out for butt coverage if you don't want it to sit open at the lower half, reduce the under collar width and don't sweat Step 36

If only I didn't find this version perfectly wearable I would have an excuse to make those tweaks and buy some really nice, fancy cashmere wool for a "proper" one. Or maybe now that I've used up this cheap fabric I can do just that for that other Lisette coat pattern.... :)