Hello! I'm delighted to be kicking off the Maaidesign blog tour, introducing a fantastic new line of fabrics: See You At Six.

For the next ten days a great group of sewing folk will showcase the new rayon fabric line that Maaike is stocking at MaaiDesign. The blogtour disclaimer, of course, is that the fabric was sold to me at a discounted price. But you can try it at a discounted price too, and be just as objective, or not (*cough* Australian political reference) by using a discount code at the end of my post. 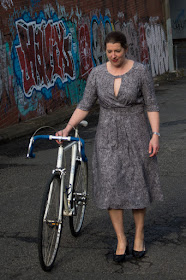 I suspect everyone for the next ten days is going to say this one same thing: The hardest part of all was choosing which fabric to have.

But it's true. Well, that and having to be photographed at the end, but the sewing? Well the sewing with rayon is nice. Seriously nice.

I could say I chose this fabric: Lines in Black & White, but actually I gave Maaike a list of three different fabrics as I simply couldn't decide and let her choose for me. I think it was my first choice. At least I hope it was, as I love it.

A soft, drapey fabric like rayon is begging to be sewn into a spring dress and I had an image in mind. A lengthened version of Lisette for Butterick B6168 with altered sleeves. I'll talk more about the pattern and the changes I made (and see if I dare show you my trial run!) in another post. 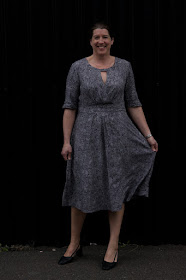 Once my fabric arrived, it occurred to me I had already sewn with what would appear to be a similar fabric, in that it's a black and white rayon (blog post here). I had a little comparative feel, then closed my eyes, moved the fabrics around and felt again... The See You At Six rayon has a much flatter, tighter weave feeling than the Spotlight rayon I'd used previously. It's like the Liberty lawn of rayons!

When sewing, the rayon holds an ironed crease beautifully. So much so that it wasn't necessary to use pins at all for hemming the skirt. Evidence that it holds a crease well is in the photos: I'd driven all over the place looking for a photo location that wasn't my neighbour's shed, but sorry, you're getting the neighbour's shed anyway and car seat skirt creases for good measure. 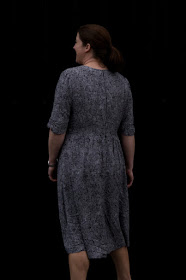 Given that it's light, non see through, drapey, swishy and easy to work with, it could very easily become a favourite summer dress fabric. For those reasons, and of course because there's those other couple of prints that I didn't end up getting this time around... 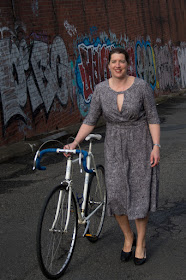 From today until the 30th of September you can use the discount code: seeyouatsix to get 10% off all fabrics in the See You At Six collection from Maaidesign

Stay tuned to the blog tour via the links below, or by following Maaidesign on social media.