Shortly after P got his Pokemon t-shirt, I was thinking it was time A got a stencilled t-shirt of her own. She had been talking about which Pokemon character she wanted, when....

We went to see a film about the cutest pair of cartoon cats: Pim & Pom

The Adventures of Pim & Pom is a dutch cartoon drawn from stories dating back to the middle of last century (Wiki link in English: Pim & Pom) and the latest film; Pim & Pom's Great Adventure was being shown at ACMI

The cartoon has a really nice aesthetic with lovely colours, simple shapes and super cute animation. Add in some very catchy tunes and a ripping plot line and we thoroughly enjoyed it.  There was plenty of laughter and quite a few tears (that's my boy!) when Pim & Pom had a falling out and became temporarily estranged from each other. 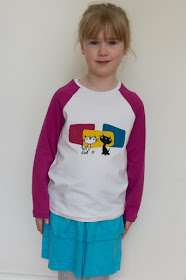 I must have had the iron settings too low as the freezer paper didn't stick down as well as it usually does and my background shapes ended up a bit wonky. Again, I cut out all the bits, then replaced them all as I ironed the stencil onto the t-shirt.

Then I could remove one part, let A paint that colour before removing the next part and so on. If I were patient I would let the paint dry then replace the stencil but I tend to just let A paint most of the colour block then I do the bit close to the previous colour so they don't overlap. 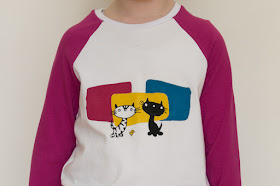 The T-shirt fabrics were chosen purely by what was in the stash, of about the right amount and could be used up in one t-shirt. Then I tried to mix the pink paint as closely as possible to the sleeve colour and then tinted the blue and yellow paints 'til they seemed like complimentary colours to the pink - to my eye at least! 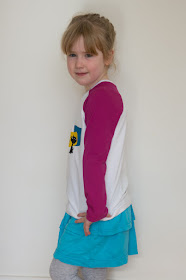 The T-shirt pattern is the Oliver + S Field Trip Raglan Tee. My notes say size 5 with about 1 1/2" extra body length and 1 3/8" extra sleeve length. It's plenty roomy enough and long enough so hopefully it will be worn until it's faded! 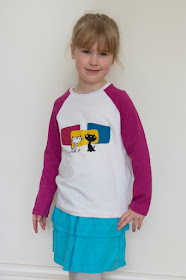 Much less recognisable than a Pokemon character for the average under 10 year old, but I'm sure Dutch people in their 50's would say "Dat is veel koeler dan Pokemon"*