Tomorrow is the last day of the school year and P has made a gift for his teacher.

He's had simply the loveliest teacher this year. She's young and impossibly beautiful and seems to have these kids focusing and following on her every word. They are like puppy dogs who want to please. It's adorable. She got married half way through the year and if she hadn't, I'm sure she would have had proposals from most of her class by now.

Last year I saw these amazing plants that ParrishPlatz' daughter made for her teacher and noted it away as a wonderful idea. P is pretty keen on carnivorous plants too, so with just a little bit of help he made his own.... 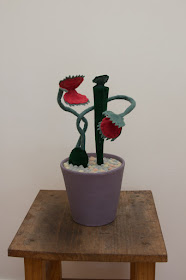 First he drew a sketch of how he wanted it to look. The plan was for one pitcher plant and two Venus fly trap stems. He made some measurements as to how high the pitcher plant should be and we started on that first.

The diameter of the pitcher plant was limited by me having only bought 10cm of the felt. I cut the shapes and then he formed the end of some wire into a loop to give the lid some structure, and the plant a "backbone" 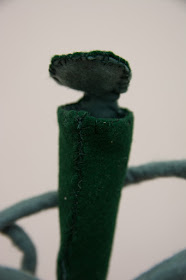 One light green and one dark green shape were stitched around the neck and lid enclosing the wire loop, then the tube was closed by stitching the free edges together. He used a blanket stitch for this, and mostly got the hang of it - a few missed stitches and quite a lot of needle unthreading. Luckily with felt it's possible to double thread the needle and still have it pass through easily enough. 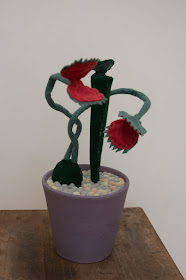 The Venus fly traps have a figure 8 of wire in the "mouth" parts with the wire exiting through a small hole in the green felt. A running stitch holds the inner and outer layers together.

I made the stem tubes for him on the sewing machine and then turned them right side out. A second piece of florist stem wire was needed to join on and make the stems long enough and then P stitched a little bulb for the base of the plants.

The stem wire is inserted into some florist foam that I trimmed to size and wedged into the flower pot. When A and I were out gathering the supplies we searched high and low for nice pebbles for the pot. We couldn't find any that were suitable, but did spot these little felt balls that make the perfect pebbles. P slapped some fabric glue onto the florist foam and stuck them down, and the three packets we'd bought was exactly what was needed to cover the base. 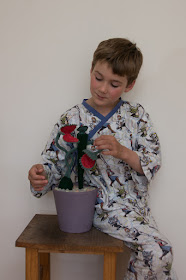 It took him quite a few sessions to make this, and I won't lie and say it was all peaceful crafting. At this time of year the kids, and perhaps me too ;), have pretty short fuses. Everyone is a bit tired and crabby. There were a few occasions when he put off doing any work on it in favour of afternoon TV watching. Then there was a bit of exasperation and annoyance with himself when stitches went awry, or the thread got tangled around the wire.

I was very happy to re-thread needles, provide design advice and generally help out, but I made it very clear that he should be able to say that he had made it himself.

And once he'd finished, he was so absolutely delighted. He kept saying how impressed he was and that it really was remarkably good, and how good he felt to have made something so good, and how good it would feel to give it to his teacher and how A should come and look again to see how good it is... 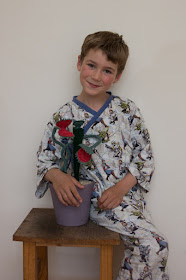 The kids played around with the stems, bending them this way and that. "Hilariously" they both lost digits to the aggressively ravenous Venus fly traps.

He signed the bottom of the pot and we wrapped it up to deliver to school.... 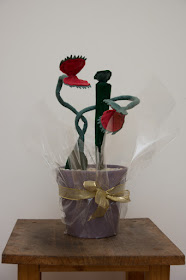 It was fun to send a preview photo off to Jennifer and her kids and thank them for the great inspiration. There's a good photo of the shapes needed to form the plants on her blog. I hadn't actually referenced that, and we ended up doing ours a bit differently. I thought briefly about documenting it as a full tutorial. But really, the whole appeal of a kid-made teacher gift is that it's unique, slightly shonky and completely adorable.

It's the idea that was the winning bit, so thank again to the Parrishplatz gang. There are so many funny, beautiful and clever craft idea on her blog from personalised snow globes through to family crest beer drinking tables! It's one of my all time favourite blogs. Check it out!