I'm going to confess that while I did some pattern tracing and cutting of kid's clothes the weekend before Kid's Clothes Week started, I was sidetracked by some sewing for me, and didn't get back to the kid's stuff until after Wednesday. So it was a half and halfer kind of sewing week.

Once I knuckled down to the kid's sewing I slaved each evening late into the night to make three pairs of Oliver + S Sleepover Pajamas before the end of the weekend.﻿

The littlest pair are for Oscar who turns two tomorrow. He's previously been the recipient of a little blanket, and then last year the Playtown set from Little Things To Sew. 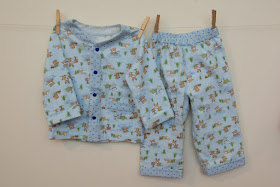 I already had the size 2 pattern drafted as that's what A's been wearing since here and here. They really do fit forever as turning down the cuffs gives another inch in length and they're pretty generous to start with. 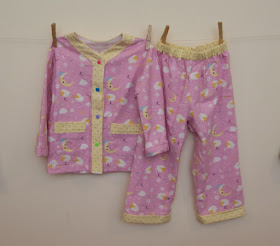 A's pyjamas are a size 4. I chose to leave the ruffles off for the first time. They're super adorable with the ruffles but I knew it would be the time consuming bit that would put me over the edge.

There's no getting around it. These are some time consuming pyjamas to sew. Maybe I've become lazy with all the knit fabric overlocker jammies I've been making, but these ones kicked my butt.

Thank goodness for snaps as doing buttonholes on all three pair would have been untenable! I had A helping me in the garage lining up the snaps and setting them into the snap press, so naturally she got to choose her own colours, hence the rainbow snaps on this pair of pyjamas. 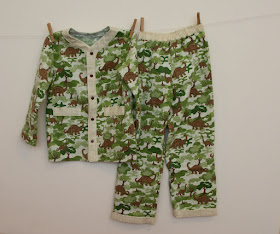 Can you see the pockets? They're pretty well camouflaged as I was particular about fussy cutting them so they matched. I've said it before: you don't need pockets on pyjamas but if you're going to put them there you may as well do it right! 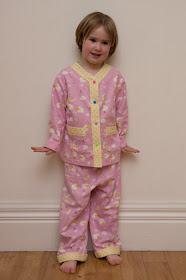 The kids chose the fabrics themselves from Spotlight last summer when it was on sale. My recollection is that the main flannelette fabric was $2/metre at the time. As they chose one fabric each they also volunteered that baby Oscar might like the blue camping animals fabric. So his birthday present was planned by the kids a long way out. 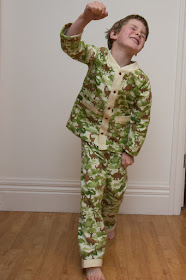 I would never have thought that I'd get into pyjama sewing, but if you're tired of having tasteful, darling dresses rejected then knock out some novelty print fabric pyjamas. The kids will love them and they'll get a ton of wear compared to anything else you make. 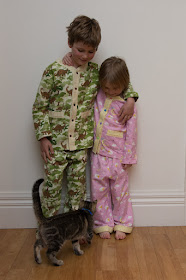 Sewing these three pair was made trickier by our little houseguest seen photobombing above.
He gets a serious attack of the ratbaggy demon kitten just after the kids have gone to bed and I'm trying to sew. Obviously, a moving sewing machine, a pile of fabric, pattern paper, threads, it's all just too much for a kitten to resist. I had to press all the seams on these pyjamas with the cord to the iron wound over my shoulders so that it didn't get attacked from below! 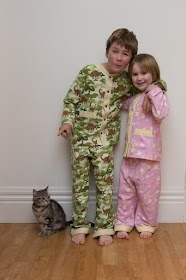 I think that's us done for pyjamas for a while. At least until summer rolls around.

How was your Kid's Clothes Week. Was it slow and steady or a 4 night bender like mine?
Lightning McStitch at 22:18
Share