We love Jean Paul Gaultier: Culottes for all! 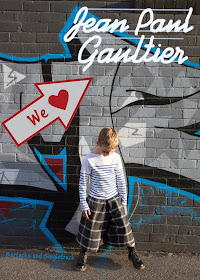 If you live in Melbourne and went outdoors at all over last summer, you probably went to the exhibition The Fashion World of Jean Paul Gaultier at the NGV.
We did, of course! And can you guess how happy I was when P looked at the mannequin of Jean Paul himself and declared his outfit was cool.... 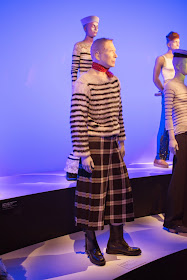 Well, the Oliver + S Lunch Box Tee and Culottes pattern had just been released so I was all over this idea, and with that teeny bit of encouragement from the boy I was convinced it had to happen. I'm over on the Oliver + S blog today talking a little bit about boys wearing culottes. Here I'm just going to scatter some pictures around while I ramble on about the exhibition.
If you didn't get to see the exhibition then stick around, even if you're horrified by the idea of my son in culottes, for more pictures. You can also see the overview and themes of the exhibition at the NGV website by clicking the banner below

The exhibition was an outstanding success for the gallery. On my first midweek visit in November it was nice and quiet, but returning on a weekend in January was bedlam!

Of course there were corsets 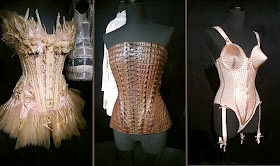 A great feature of Gaultier's work is his humour, that and a fair dose of sexuality. The kids were fascinated by entire body suits of stretch lace with beading and tiny beads perfectly sewn to represent pubic hair and nipples. Hilarious when you're 6! 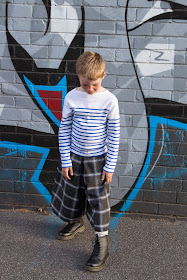 My 4 year old, however, was initially quite freaked out by the mannequins. While some had plain, blank faces. Quite a number of them had video projections of a model's face onto the mannequins blank, white face. Their eyes followed you around the room, they smiled or winked at you, or struck up a conversation with themselves in the mirror. 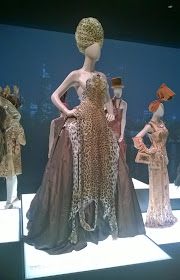 The intricacy in some of the work is breathtaking. A little beaded nipple might not seem too complex, but how about that cheetah "pelt" above?... 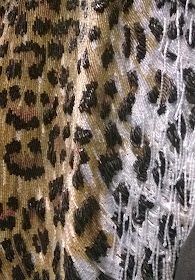 All beads!
That was one of the garments in a room full of appropriated cultural dress. The fact that almost every world culture was represented, somehow made the appropriation of their cultural costume seem cool rather than wrong! 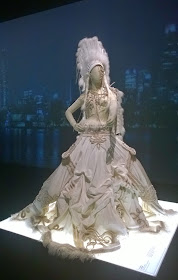 I was smitten with some of the more wear-able dresses (wearable if you're Cate Blanchett or Kylie Minogue that is). The blue dress below is divine. The flowers are of the same jersey as the dress and "simply" twisted and stitched into place. Genius.

But P was definitely taken with the London punk look from the 1980's. I don't know if it was the denim, the tartan, the boots or the mohawks but he was loving it. 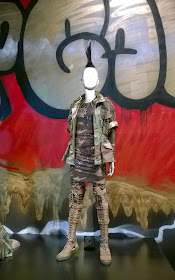 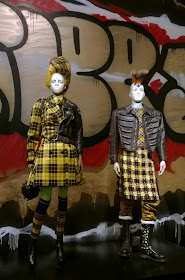 So I set out to find some tartan wool to match JPGs culottes as closely as possible. He already had the perfect mariniere top which my mother in law brought back from a Mediterranean cruise - as an aside, I really wish I'd photographed every t-shirt my kids have scored from her travels. Over the last 6 years there have been t-shirts from all over the world with Antarctica being the only continent not yet represented! 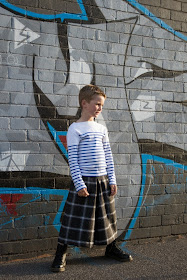 I found this fabric at Eliza fabrics. It was very cheap and very scratchy. I'd always imagined these would need to be lined anyway, so they were, and the look of surprise on his boyish face when his bare legs felt slippery lining fabric for the first time was priceless! 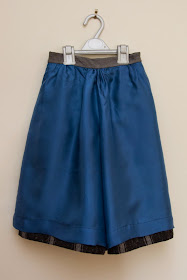 I cut the waistband in two pieces also so that the scratchy wool wouldn't be anywhere on the inside, and used some cotton for the inner waistband. 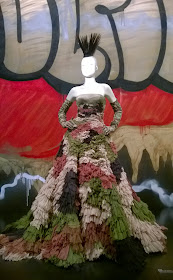 The other part of the exhibition that P was interested in was the graffiti art and some incredible big murals by RONE. I didn't get any pictures but there's a blurb here about his collaboration with the NGV.
We have some very impressive graffiti art near home (including my workplace building) but the local architect's wall is more subdued and was an appropriate colour scheme for our photo shoot. 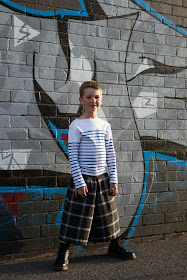 To get the Lunch Box Culottes to be closer to the Gaultier silhouette I took out a lot of the flare of the leg. I dropped a vertical line down from underneath the pockets and of course, that allowed me to pattern match the tartan on the side seam too. I also pinched about an inch out of the width of the back pattern piece. They're a modified/narrowed size 6 with the length of the size 9. 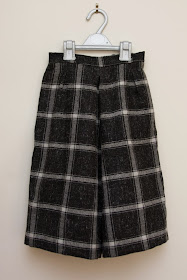 So what does he think? Well, he loved them to bits until it came time to sit down to dinner. Then, even with the lining he said he could feel the itchiness on his legs. I suspect that may mean they get much less wear than he'd initially thought.
I had no expectation at all that he'd like them. I was delighted that he was so into the idea and I really like the look. Which is much more than can be said for Flipper. I suspect he's appalled but is trying not to say anything.
I love the idea that when you're young you can wear what feels good and makes you feel good. Doesn't mean he's getting a Mohawk any time soon though! 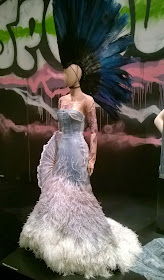 To see more of the exhibition and to hear Jean Paul talking about his work, there's a very charming interview by Virginia Trioli here. His story about his teddy and the invention of the conical bra has probably been told many, many times, but he still sounds enthusiastic and charming.
I love the fact that I've learned to sew, as a project like this one combines all my favourite things. A light hearted dig at the world of fashion with a knock off, an out there outfit for the kid, a chance to use another Oliver + S pattern and a family trip to the gallery for the inspiration. 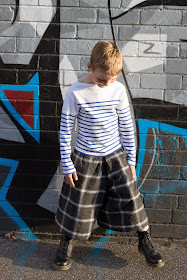 I sew to amuse myself and I had a lot of fun with this one!
If you get a chance to see the Gaultier collection somewhere else in the world (I think it opens in Paris soon?..) then you should go. But I'm sure Melbourne put on the best exhibition!
Lightning McStitch at 23:22
Share