I've been making quite a few things lately and many of them have gone straight into the kids wardrobes without being photographed. Some are in heavy rotation and others are not...

The Oliver + S Lunch Box Tee and Culottes was a bit hit and miss for my daughter. 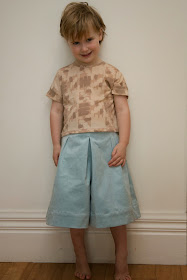 She LOVED the t-shirt and wanted to wear it every day after I'd made it, but it is indecently short. It's really cute with it's cropped, boxy shape but when you're 4 and you're constantly putting your arms above your head and twirling, and then you tug the front of your skirt/pants down below your belly it's not such a good look!

The fabric was a remnant from The Fabric Store, and there's plenty left over to put a band around the bottom and save this from looking like a t-shirt from two summers ago. 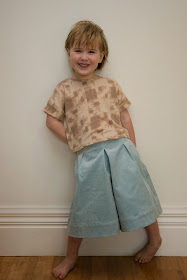 The T-shirt is the View B in a straight size 4. I've since made the long sleeved View A with the pockets and the body length is better but the sleeves are a bit too short. Note to self, add length everywhere!

I edited out all of the many photos with her arms up and belly out, but the posing did get pretty silly... 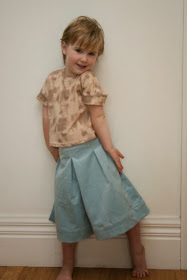 The culottes are, I think, seriously cute, but this photo-shoot is the only time they've been worn. They're hanging in the wardrobe, ready for an outing anytime she gives them the nod... They're also a straight size 4 and the fabric is a stretch velveteen - at least I think that's what you call it. I picked it up ages ago from the Fabric Store and previously made some Field Trip cargo pants from it. Those size 2 pants and these culottes both came from 1.5m of fabric. Curiously, those pants were largely rejected too. I should have seen it coming for the culottes then, right?!

I'm holding out hope for these culottes. She might come around. I'll document the long sleeve tee soon and then at least I'll remember how much more length to add to the next one.

Meanwhile, I've been playing around a bit more with the pattern and been very happy with those results! - to be revealed later this month, and I don't mean revealed in the sense of an eyeful of belly button cause your t-shirts too short! 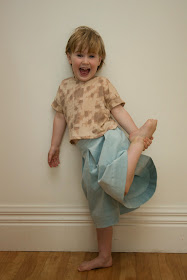