Firstly I want to thank everyone for their comments on my last blog post. I don't know if I'll be able to make sense of what's going wrong, or work out how to fix it, but I am feeling better for all your kind words! I could get far too philosophical about the narcissism of blogging,.... suffice to say I love hearing from you, and I can't believe I enticed my own husband (aka Flipper) into his first blog comment. Yay! (oh, and if you read his comment and didn't get it - here's the link to the best scientific powerpoint presentation ever!)

The randomly drawn winner of the Oliver + S pattern is Inspinration - I've sent you a message via facebook. I am terribly behind in my own blog reading and comment leaving list, but I do always click on the names of people who visit my blog and I love seeing what you're doing.

What have I been doing? Far too much actually.

A couple of weeks ago I joined the pattern testing crowd again to test the Julia Sweater for Compagnie M. 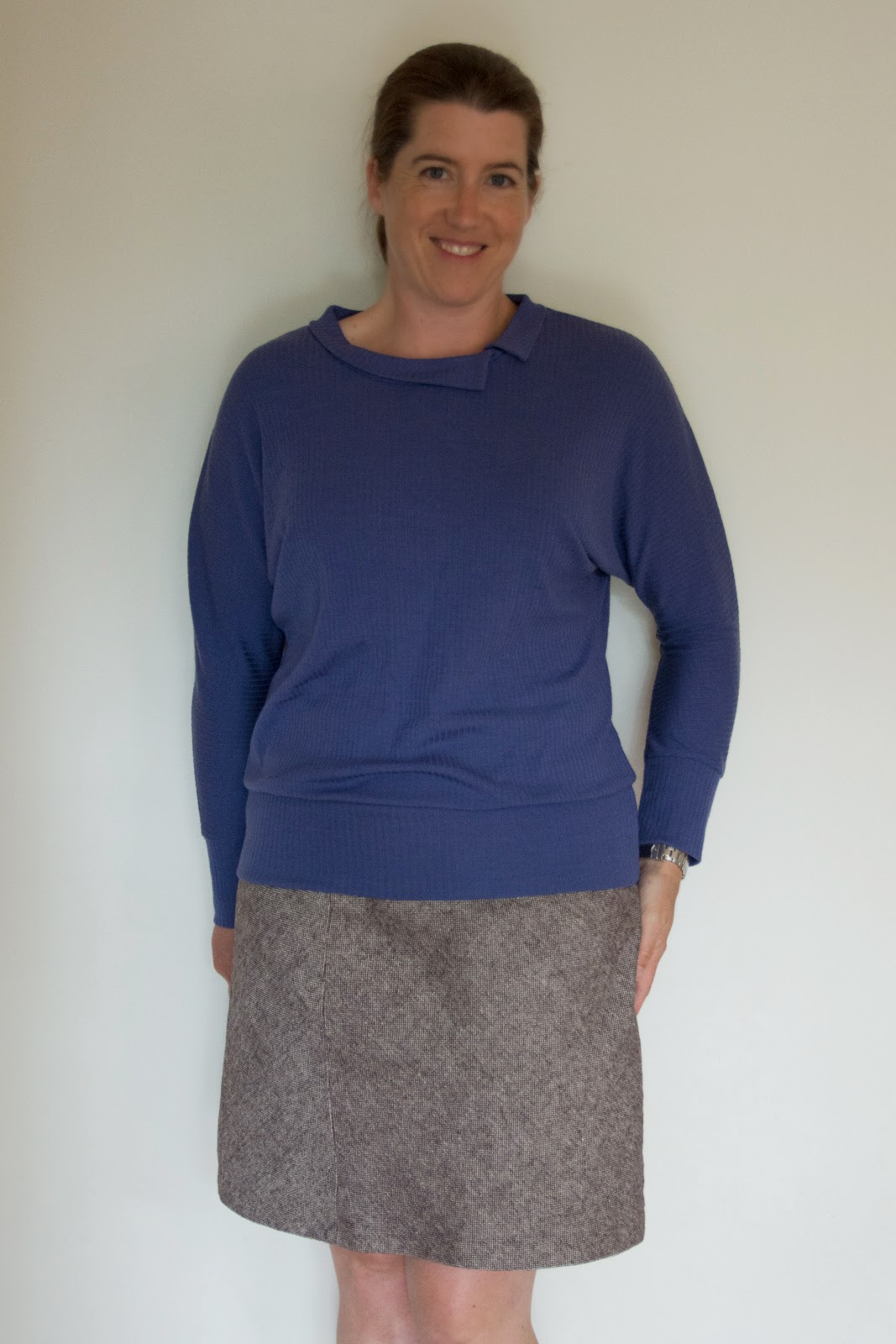 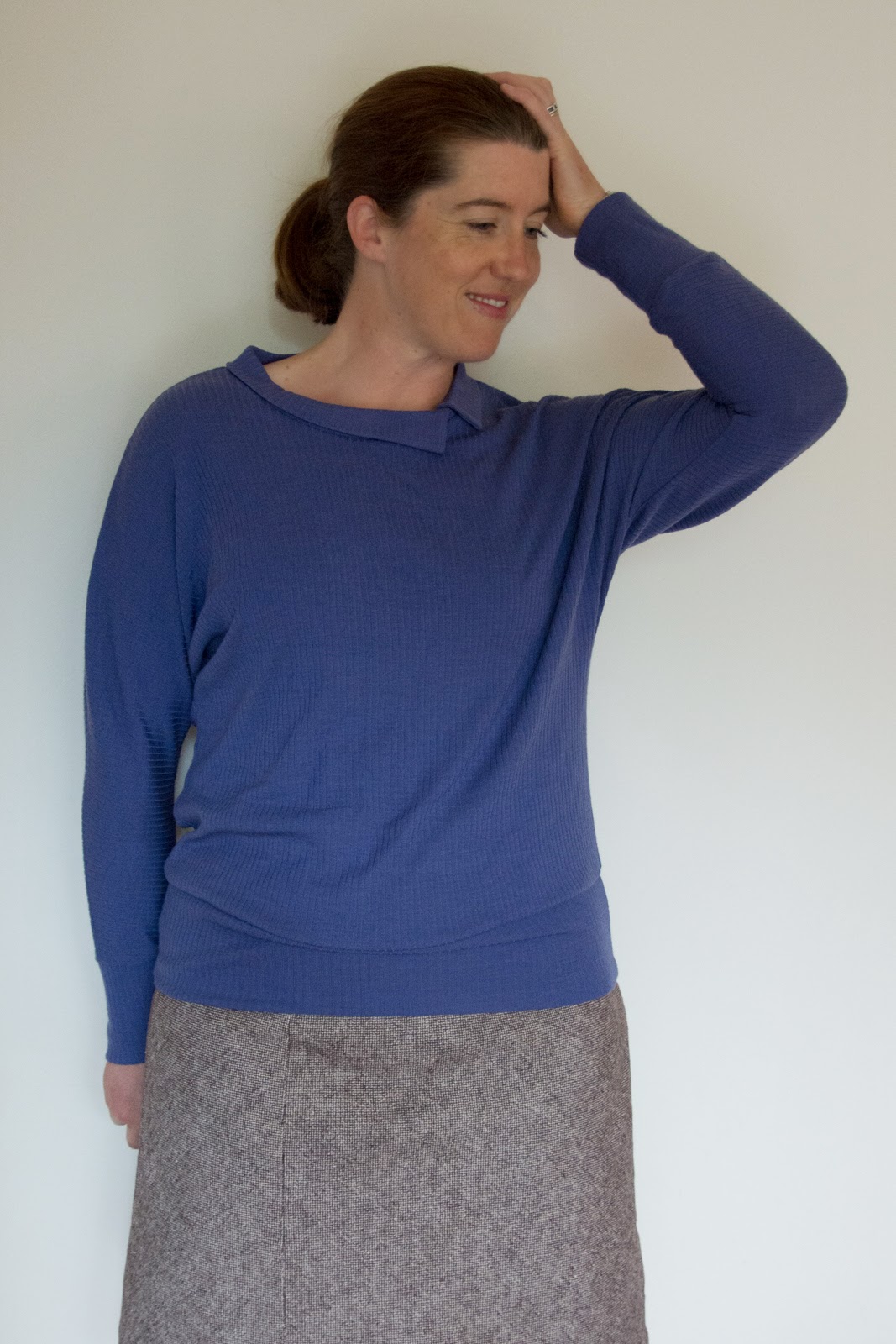 This first one is a merino rib knit with quite a lot of stretch in both directions. It worked perfectly. Since the sleeve's circumference ends up being perpendicular to the main direction of stretch, some testers were having trouble with too tight lower sleeves. Marte ended up including instructions for a split front and back panel with the sleeve parts being angled 45deg and apparently that works fine with less stretchy fabrics.
The collar option I sewed above ended up being ditched in favour of a wider neckline and a bigger collar. The final collar does look more balanced on an adult sized sweater.
To properly test the instructions I thought I'd have a go at the option with a button tab and front pocket: 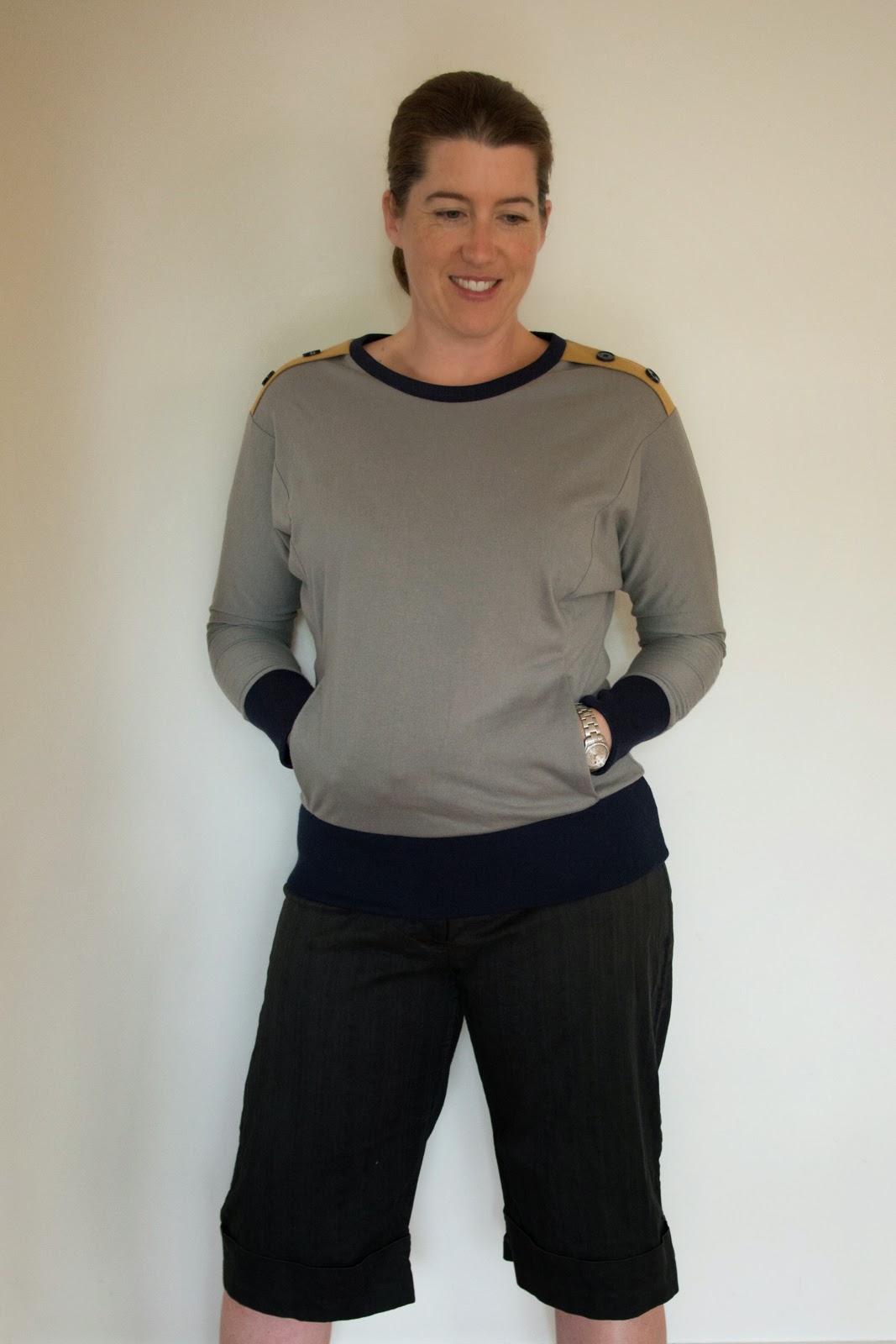 I picked some random bits of T-shirt cotton knit and some navy ribbing. The lower sleeves are a firmer fit on this one, but they're still Ok. I found the instructions for the pocket to be somewhat lacking. I've sewn exactly this kind of pocket with the School Photo dress but that one comes with very detailed instructions, pattern markings at which to stop the seams and clear diagrams. Perhaps I made things difficult by printing the instructions in black and white, and thus the coloured photos were less clear, but I found it very confusing. Mostly the entire sweater can be made on an overlocker, but I couldn't get my head around stopping an overlocked seam mid way up the garment, so reverted to the sewing machine. 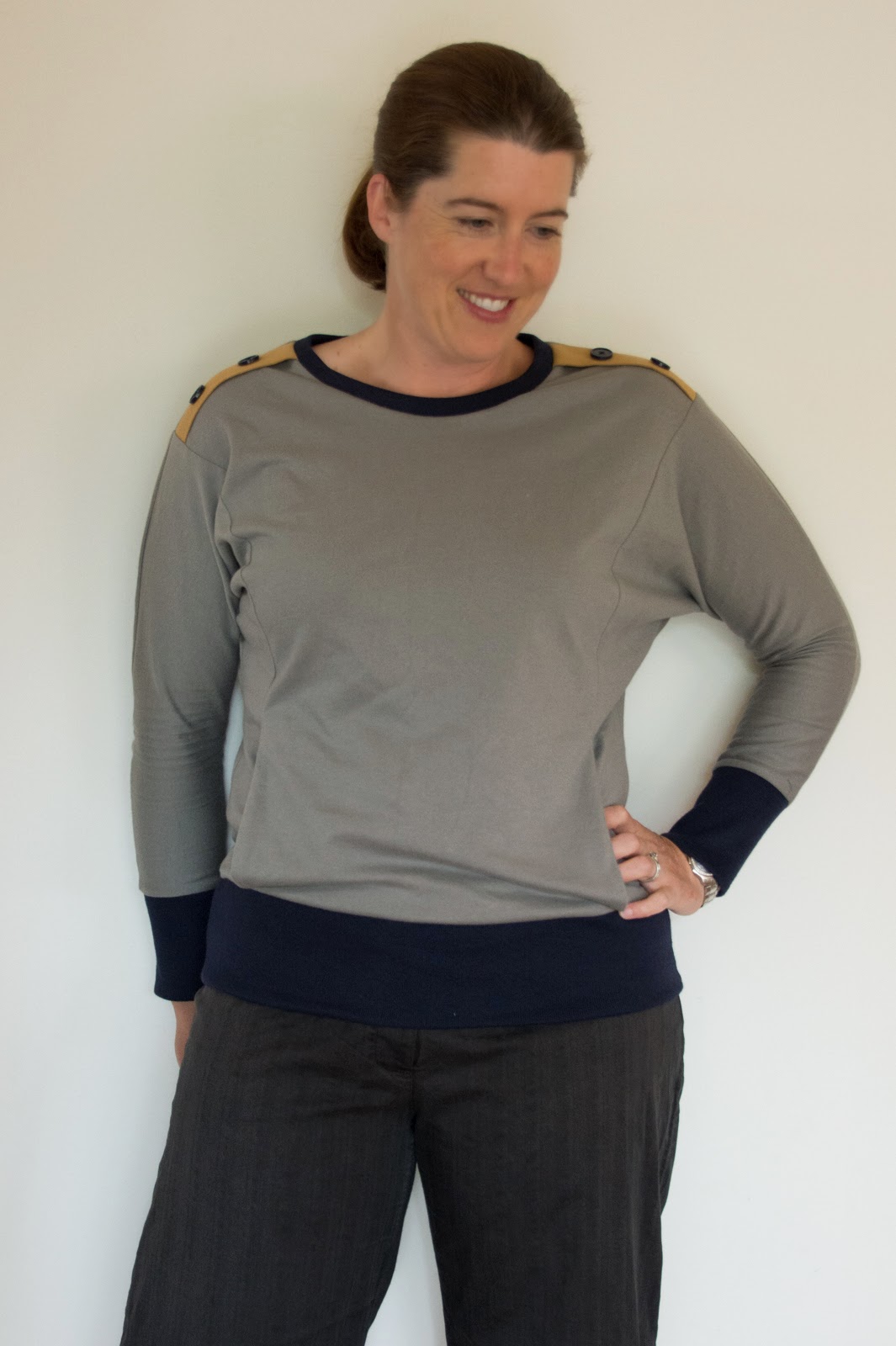 ﻿
The instructions are probably no more or less than you might expect with an indie PDF pattern. I guess I've been spoiled by the likes of Oliver + S and Thread Theory.

Speaking of Thread Theory, I've just been sewing a Christmas gift for Roger (remember my dad's body double from father's day?). He wanted a cardigan just like dad's, only with pockets, and some red lining.

I've almost fulfilled his wishes. More details and hopefully modelled pictures to come after Christmas, but here's a sneak peek: 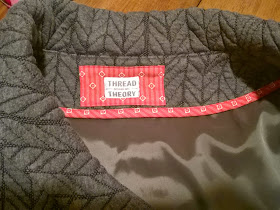 And then, as soon as I get the chance I'll be doing a bit of Thread Theory sewing for me! They've just released their first women's pattern, the Camas blouse,  as a reward for all the women who buy their patterns to sew for their blokes. Although there are blokes buying their patterns and sewing for themselves. I love this blog post and the seriously impressive pants he made.

But back to my Julia sweater (which I'm wearing right now as I type)... Flipper said it was missing one thing, so I photoshopped it in. If only I'd thought to do the hand salute too! 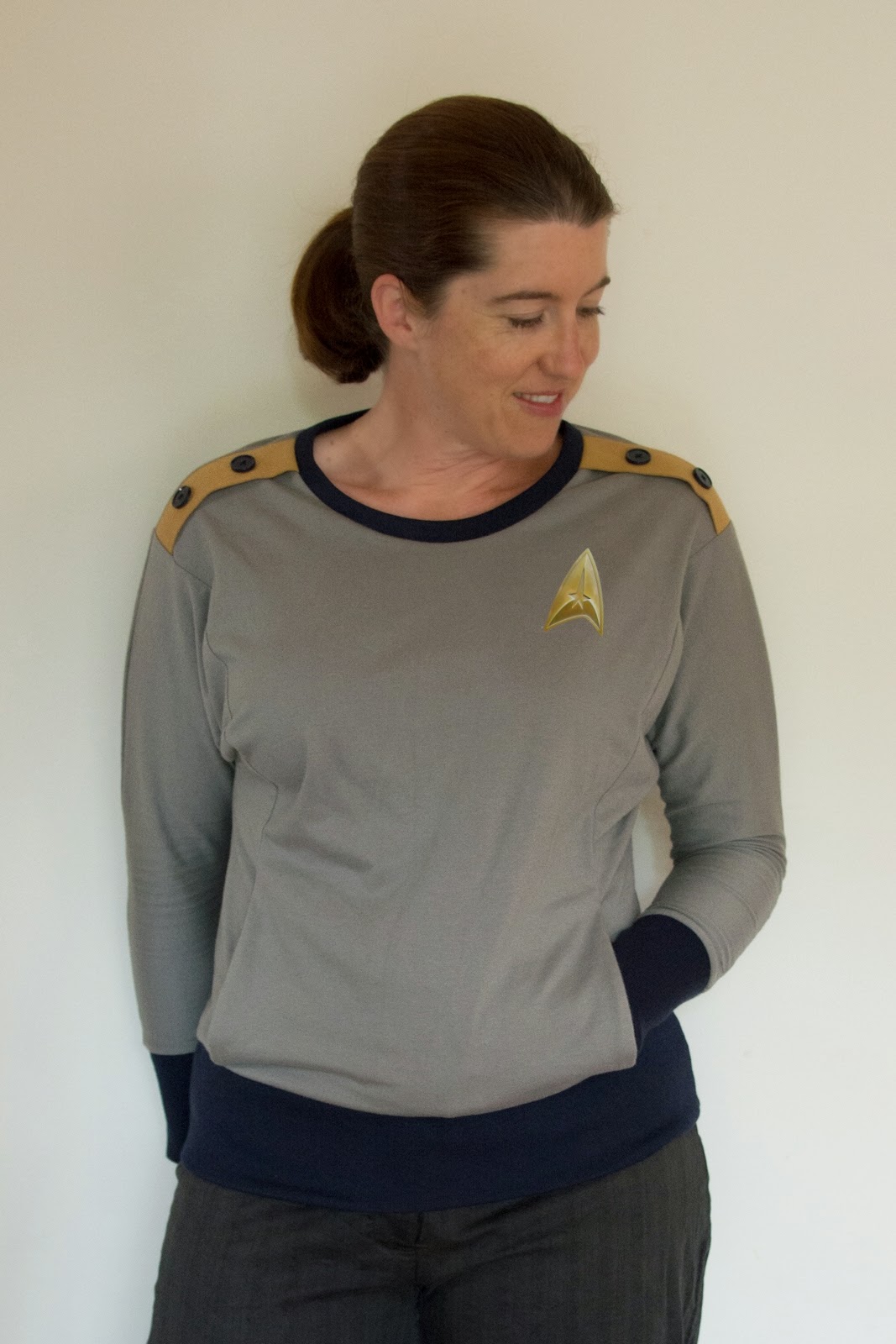