Tuesday of this week was Italian Day at P's school. We were told there would be Mt Vesuvius volcano experiments, drawing Michelangelo style while lying on your back under the classroom table, playing calcio, and eating; bruschetta, pasta, tiramisu and gelati....

And, of course, there was a need to dress up. I was really mindful (for about 5 minutes) of not taking over and getting over excited about my his first school costume. We talked about what P wanted to wear and searched for some images. Turned out we had almost everything we needed for a gondolier...

Everything that is except the hat. You already know what I did about that, right?! 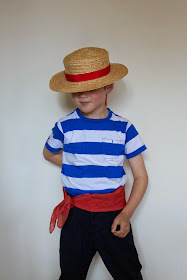 I'd never made a straw hat before, but I figured a boater would have to be the easiest to start with. It's all right angles and I imagined I would make the three sections and then join them together. Sounded simple in my head.

I discovered Torb and Reiner and gave them a call. No, I've never done this before. No, I don't have time to drive across town for a lesson or to buy a hat block. No, I have no idea what I need or how much of it...

To her credit, Nina, who took my call, was probably not used to this kind of brazen ambition from a complete novice. But I was coming off the back of my first-ever-beading-project-blue-ribbon and in my head I could imagine what I was going to do. She packaged up 10metres of 10mm wide wheat braid and some red grosgrain ribbon and sent it to me express post for next day delivery.

Of course, I foolishly sat on it for 48 hours while finishing my Kid's Clothes Week sewing, and then began the weekend of the Straw Boater Project. 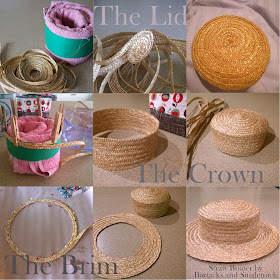 I made a cardboard "hat" for P so that I would have the correct size and the approximate depth of the crown then started stitching....

The advice that I had from Nina was that the straw braid could be brittle and I needed to wet it to shape it. The bit that I figured out for myself was that the best way to prevent those F^*%ng twisty knots in the thread was to run the lengths along a tealight candle in order to wax them. It didn't entirely prevent the knots and there was a fair bit of tugging knots through, some occasionally successful unpicking of knots, and plenty of language of which a genteel boater wearer would not approve.

I realised, perhaps a bit too late, that the lid should not be perfectly round, so started overlapping the braid at the sides more to give it an oval shape. I kept going round and round until the lid was the same size as my green cardboard hat. 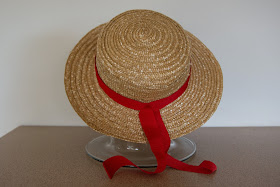 The crown was probably the easiest part. Using the green hat as a size guide I pegged out the first round and then stitched until it was deep enough. While the kids rode their bikes at the skate park on Sunday, I sewed. The lid went on top and was stitched in place, at which point it looked a lot like I should be steaming dumplings in it. As an aside, this project was probably the most pleasant smelling thing I've ever sewn. I must have been a horse or a goat in another life! 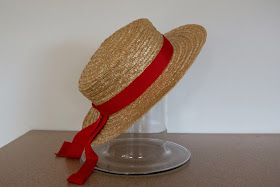 By the time I was ready to start the brim it was Monday afternoon and the kids were going to swimming. In order to sew the brim without having to hold the crown, I marked the outline of the crown on paper and then pinned the braid to the markings to begin my brim. Once I had the first stitches in place it became fixed in diameter and portable. I sewed furiously while they swam. It was the best location of the weekend as a quick dunk in the pool was all the wheat braid needed to stay supple. 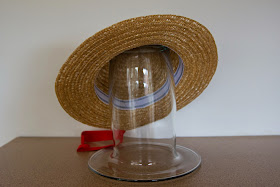 Finally, a very late night stint lasting well into Tuesday morning had the brim attached, the Petersham ribbon sewn in (that's the bit where I wished I owned a thimble) and the ribbon on the outside.

In what must be a glorious hatters version of a hole in one, Nina's estimate of 10m of braid was EXACTLY what was required. There was not even a centimetre to trim off and nothing was missing for lack of more straw. She obviously really knows her stuff! As she had every reason to doubt that I did, she had sent about 3m extra for free just in case. There might come a time when I've forgotten just how much work this was and end up making a miniature one for P's teddy. 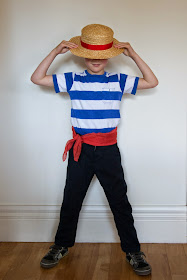 Thank you so much to everyone who followed my progress on Flickr or Facebook. Your encouragement was everything to me. It was a long, long weekend and I honestly may have lost the plot if not for the "ping" of my phone telling me that someone else "got" what I was doing.

You'd be horrified if you knew this kid's history with losing school hats. His track record is appalling. I'm delighted to say, that after seeing his mum toil all weekend, he was very mindful that if the hat didn't come home, neither should he. It did. He had a great day.