Missed By That Much.

Missed By That Much

Or: Why One Should Be On Top Of Their Social Media


Last year I created a costume for P to match his Evel Knievel bicycle helmet. 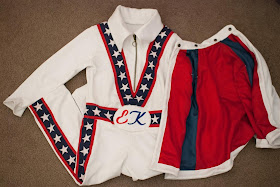 I made the costume using a combination of three different Oliver + S patterns as well as tips and instructions gleaned from a couple of others. Somewhat unwittingly I finished it around the end of October, and while we don't really get into Halloween here in Australia, I landed my costume on the internet at the peak of American costume frenzy. 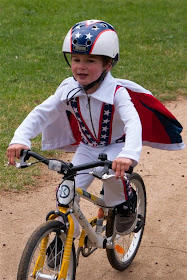 Liesl of Oliver + S invited me to guest post on her blog about the costume and how it was created. I had no internet presence at all at that stage and was thrilled to bits to guest post on such an auspicious blog. It remains the highlight of my short blogging 'career'. Evel Knievel Guest Post 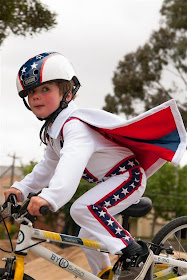 I then realised that both the ByK bicycle (the inventor/founder of which used to sponsor the Flipper and I when we raced. Not on kiddy bikes mind you, but real, proper grown up bikes) and the Nutcase helmet were being showcased pretty nicely. So I fired off a couple of "you might get a kick out of this" emails. 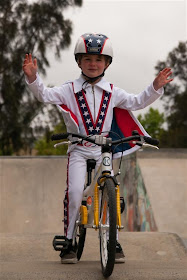 The result of which was that the pictures bounced around a few Facebook sites and I was feeling very proud of myself.

Fast forward 10 months and a graphic designer commissioned to produce material for a kids Ride Safely campaign, in conjunction with Knievel Days, spotted the pictures and contacted Oliver + S for permission to use them.

First gumby error on my part: I really should start using a watermark on my pictures.

Todd of Oliver + S forwarded the request to me.

My Hotmail email address dates back to 1996, which I'm rather proud of. However, as a consequence there are addresses in my address book which I no longer have any idea who they are: Was Maria the woman I met on a boat in Turkey, or the Finnish man I met while cycling through France who was going through a "transition". Who knows. Anyway, like other people collect Facebook friends I'm keeping my Hotmail account with all it's history, but setting my Junk Mail filter to exclusive. (my secret sewing personality uses a gmail account which I check compulsively, so don't think I don't love your comments) 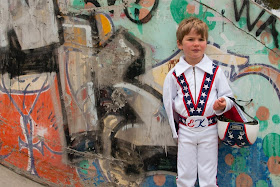 Turns out we missed the deadline the artist had to submit the campaign material by the narrowest of margins.

P missed out on being the face of helmet safety at an Evel Knievel festival.
How friggin' awesome would that have been?!

Oh well. At our house we say get back on the bike, ride hard, jump something (or perhaps just a little rear wheel skid if you're like me) but most importantly, wear your helmet!