A little while ago I posed the question to the clever crowd who frequent the Oliver + S forum of how to get the best topstitching effect. One answer intrigued me; With Love Heidi (A moniker that sounds friendly but a bit Bond girl as well) suggested using regular thread but doubling it up.

I'm happy to say this is superb advice. I've been topstitching like a fiend recently. It's far easier to thread two lots of regular thread than trying to thread a needle with topstitching thread. And that's even after I bought some special "embroidery" sewing needles. The definition that it gives is really nice, and as importantly, it saves buying reels of topstitching weight thread that then can't be used for anything else. 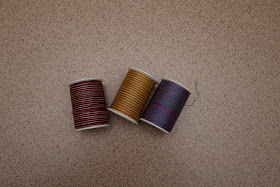 I don't know what the official length of these thread reels is, but they seem to be never-ending. I immediately wondered what it might look like to use double thread of variegated cotton to do topstitching... 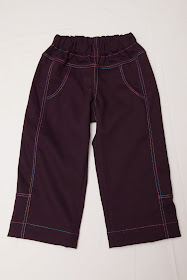 Really gay! (Not That There's Anything Wrong With That)

Someone with a bit more imagination than me might have guessed that I'd end up with a pair of rainbow pants, but I confess I really didn't see it coming.

But you know what, I  kinda like them. This is not at all my usual colour scheme. The fabric is a very weird, synthetic stretch, ribbed suiting that I picked up so cheap that these pants probably cost about 80 cents. I don't think they'll ever wear out and certainly won't require ironing or any care.

What's more, Australia desperately needs more pairs of gay pride pants on toddlers. We are being embarrassingly left behind when it comes to marriage equality. No less than 14 countries have legalised same sex marriage, yet it's something we can't even get a conscience vote on in our parliament.

For heaven's sake, even New Zealand are OK with it. Now they're not just 2 hours ahead of us but about 50 years ahead culturally.

So here's another photo of my Pride Pants: 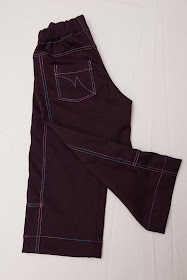 ﻿
And finally, let's let the pants themselves have the last word: 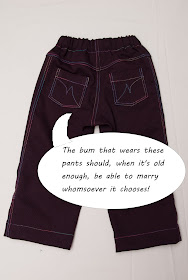 Right on, little pair of gay, polyester pants, I hear what you're saying.
Loud and proud!
Lightning McStitch at 23:05
Share