I don't know when I first spied it, but once I'd seen the Scout Shawl I knew that was the knitting challenge I wanted to try. 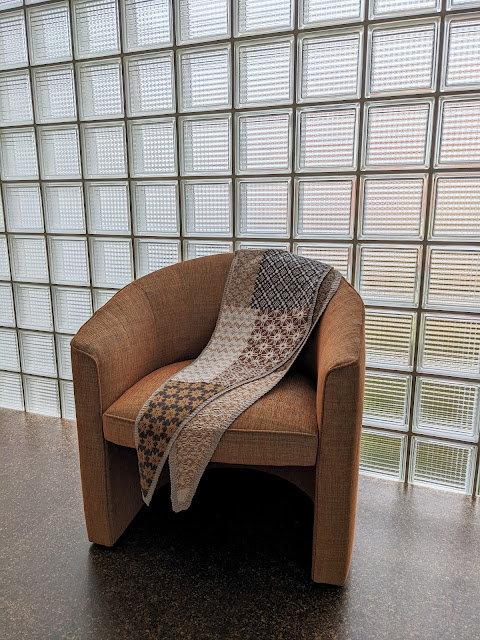 I might have spent more than 6 months looking for the yarns I wanted. Trying to find five different colours that were "neutral" enough for my tastes all within the one yarn range was a struggle.

But then I found the Knitting For Olive merino yarns. Every single one is lovely. If you're a  fan of neutral then I dare you to click on that link and not have your credit card wiped clean! 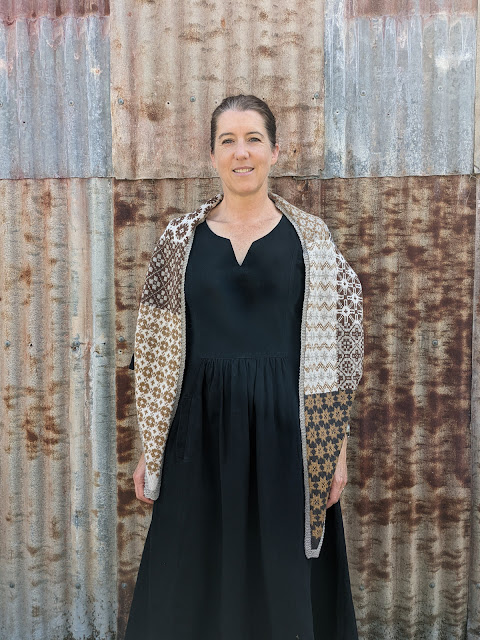 Whatever I did, I over ordered. Oops ;) 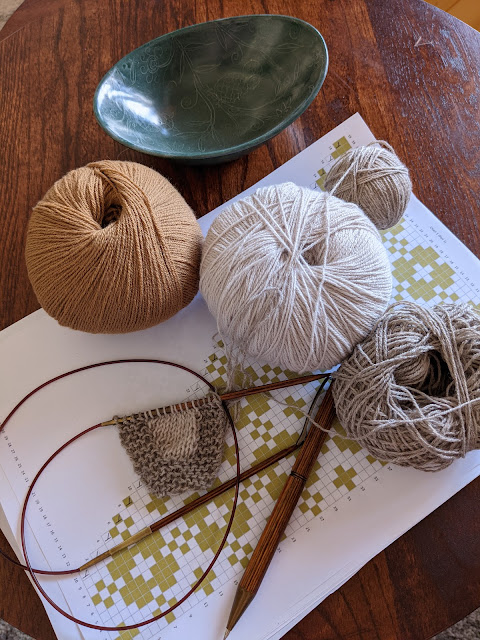 I did some swatches and even going up two needle sizes I was still coming out smaller than intended. But I was nervous that if the needle was too big the pattern would look loose and imprecise, so I settled on using 4mm needles rather than the 3.5mm the pattern suggested.

In swatching I also got my Knitter's Book of Knowledge by Debbie Bliss out and took the time to learn how to hold the yarns. I really like this book as it shows multiple ways of doing things and explains the pros and cons of each. Other knitting books seem to just give the author's view of the one way to knit.

I'd only really tried colourwork with A's Ravenclaw beanie and hadn't quite known what I was doing, so this seemed a good opportunity to get it "right".

The photo above is dated 1st December 2021 so I guess that was the start. 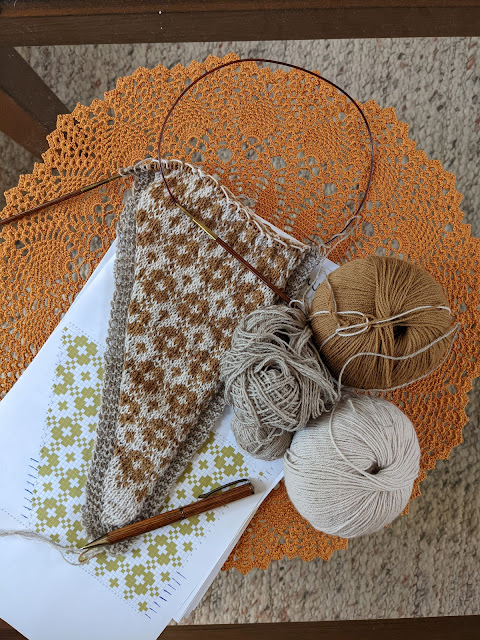 I've learned to knit in the English style, yarn in right hand, but decided to try Debbie Bliss' suggestion to have a crack at doing fair isle with a yarn in each hand.

Because the shawl is knitted flat working on the right side then the wrong side, that meant I had to be able to knit and purl both english and continental. It took a bit of practice but I got there! 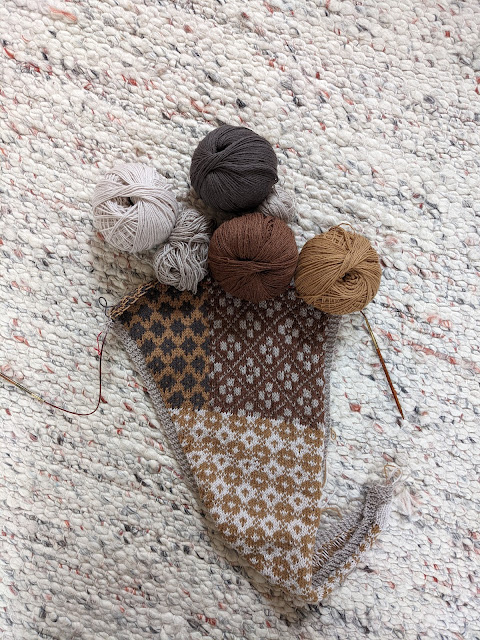 The pattern requires 5 colours: 1 light neutral background colour, and then two pairs with a light and dark shade in each pair.

My background colour (C2) is the creamy white in the top left of the picture above: Marzipan

The first pair (C1 and C5) are the two greys. The lighter grey (C1) is used for the border and is Oatmeal and the dark grey is Dark Moose

The second pair (C3 and C4) are the browns. C3 is on the bottom right in the above picture and is Camel and the central deeper brown is Dark Cognac

I made sure to put a lifeline in at each new pattern section, but there are some mistakes that were only discovered long after I'd gone beyond the point of recovery. There's a decidedly red wine fuelled wobble in that very first patterned section! 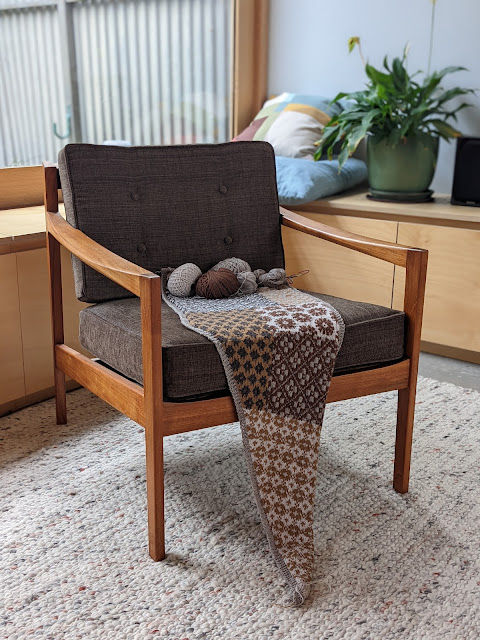 It came aw ay with me at Christmas and then again on our annual January mountains holiday. Sometimes it was put away briefly while I did something simpler for a break.
Progress pictures kept me entertained. 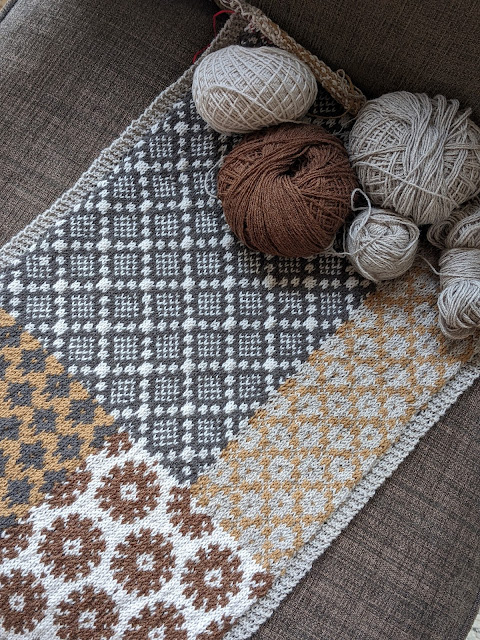 Each new pattern chart was a nice change, although the widest middle section did seem to take forever.
Still, the yarn was so nice to work with and had just enough of a woolly smell without being too raw. It was lovely journey knitting and since I don't actually wear shawls (ha!) arriving at the destination was kind of irrelevant. 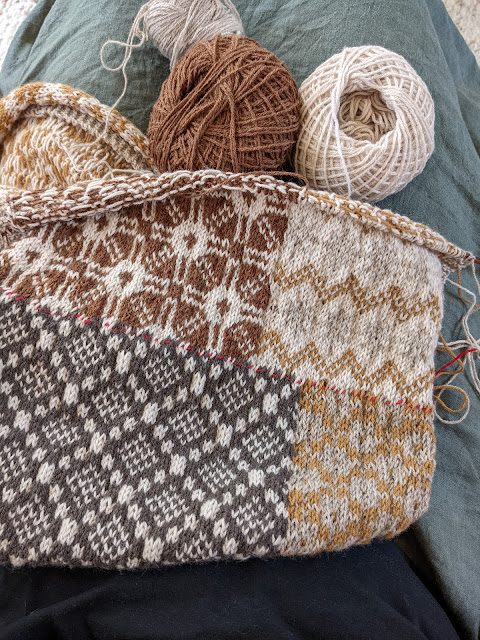 As I was getting into the decreases and each row was going a little quicker I was almost feeling a bit sad about finishing. Of course I could cheer myself up by planning to buy more yarn and start something else... 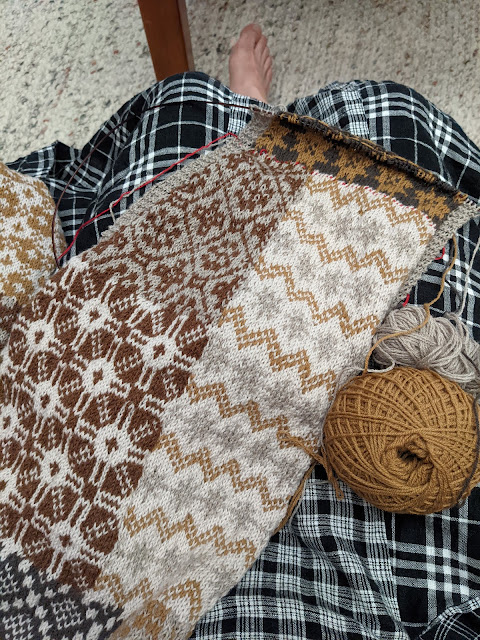 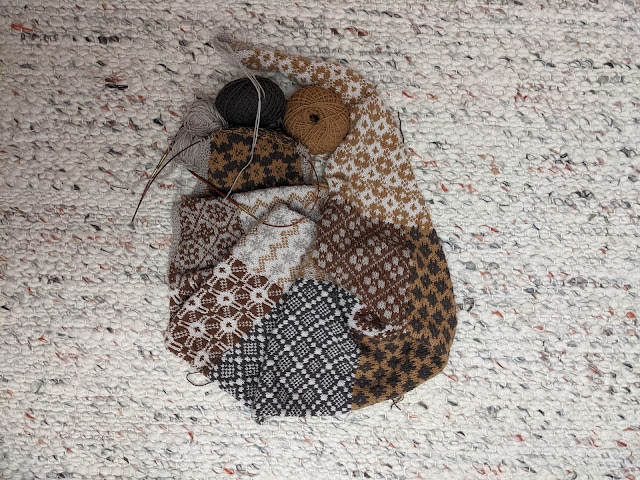 And then it was finished (photos dated mid March). I did immediately feel like I could make it again. Even with the same yarns in a different order it would completely different. Substituting even just one yarn would change it even more. It's addictive! 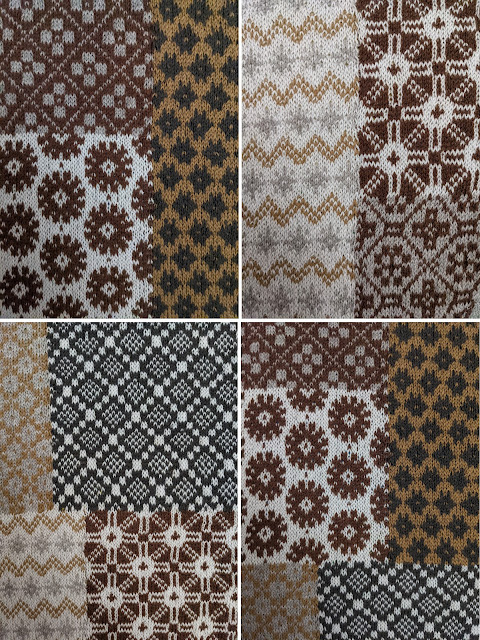 I weighed how much yarn was left and calculated roughly what I'd used. Turns out I could have got away with only one ball of nay colour (I'd bought two of all of them and 4 of the Marzipan). However it had been handy to have two balls to work from and not have to split each colour into smaller balls
Used:
C1 Oatmeal 32g
C2 Marzipan 41g
C3 Camel 29g
C4 Dark Cognac 18g
C5 Dark Moose 26g
And the final size, once blocked was only about 2-3cm narrower than the pattern. 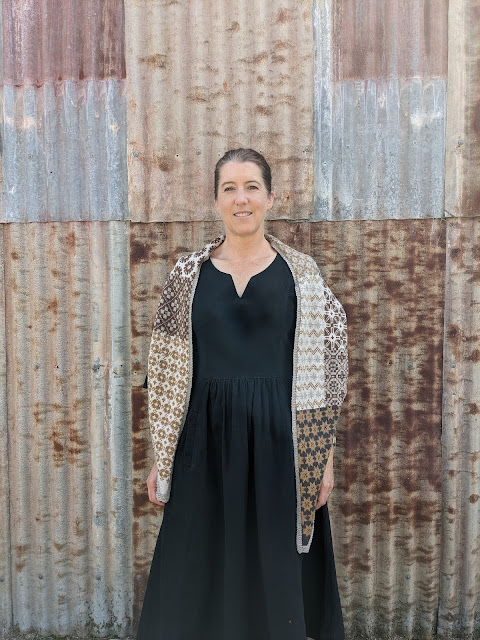 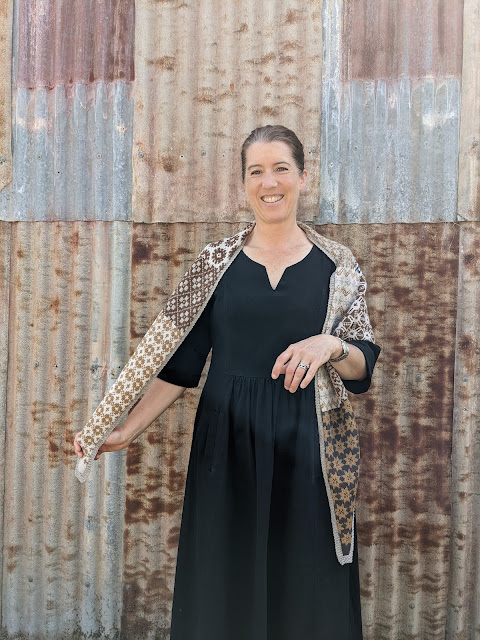 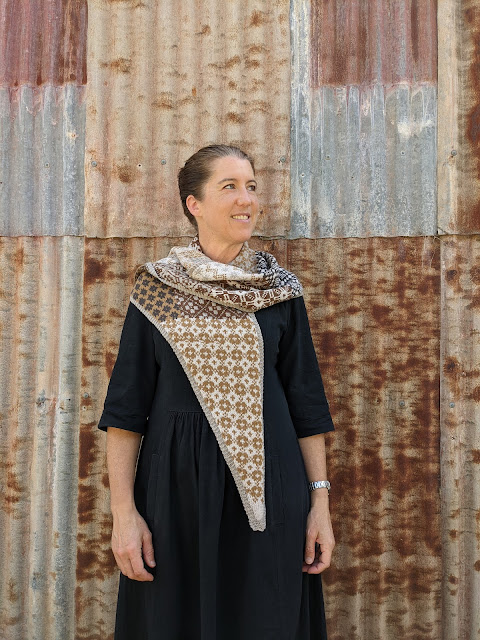 I've already started on something with the leftovers! (and it only necessitated buying one more colour!)
Lightning McStitch at 11:54 2 comments:
Share

Some people go nuts for Liberty of London fabrics. Not really me. I can definitely appreciate the quality of the fine lawn cotton. I'm just not that into most of their prints.

Yet I have accumulated some small bits, and I thought using the contrast of multiple different Liberty fabrics to create some double welt pockets with button loops would be fun. 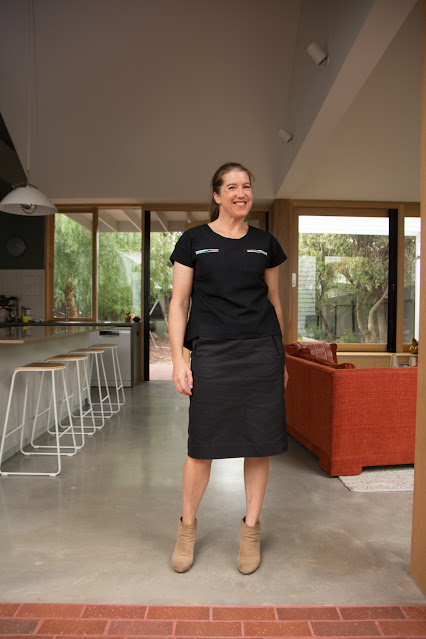 In true Melbourne style I needed to "balance" my tiny 1/4" strips of colourfulness with a whole lot of black!
So I decided to use some more of the lovely vintage washed cotton from Fabric Deluxe and make a black Verdun top with little pocket pops of colour 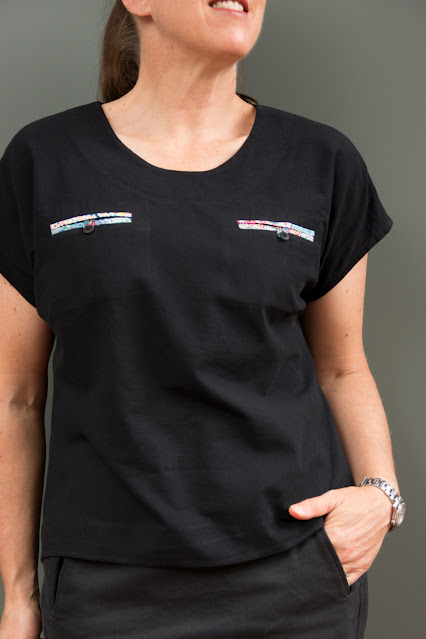 I've previously sewn welt pockets where part of the pocket was folded to create the welt. But that means everything had to be made of the same fabric. Here I've used different fabrics for the tops and bottoms of each welt and a 5th fabric for the button loops. That's a whole lot of colour for this little black duck.
There's a tutorial over on the Oliver + S blog, as in my attempt to copy Liesl (Part 3?) with my shirt dress I discovered she never had written a shirt welt pocket tutorial. After doing it messily, I did it again more neatly and wrote it up to share. 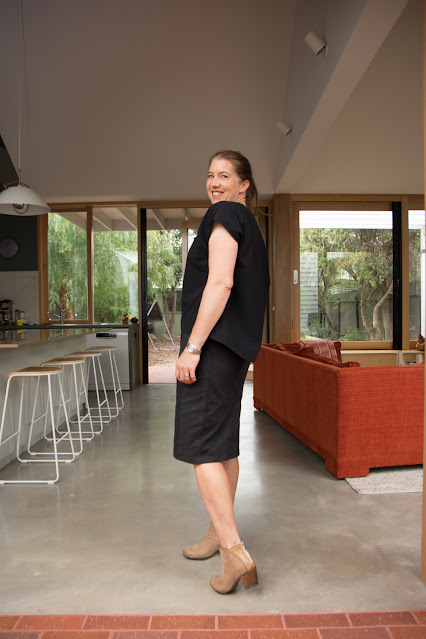 The Verdun top is a super quick, easy woven tee. It has a curved hem that's lower at the back, a nice waist shaping and is just two pattern pieces and neck/hem facings.
I'm really liking how it works over a narrower skirt; this is the Extra Sharp Pencil skirt which inexplicably I can't find anywhere on my blog. Anyway, here it is elsewhere 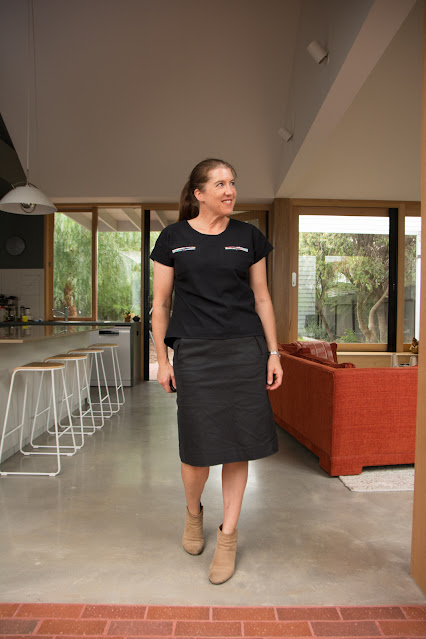 This is the size M/L Verdun with no modifications. It's very easy to wear and so long as I avoid the blues or greens that look like surgical scrubs I could definitely have room for more in my wardrobe. 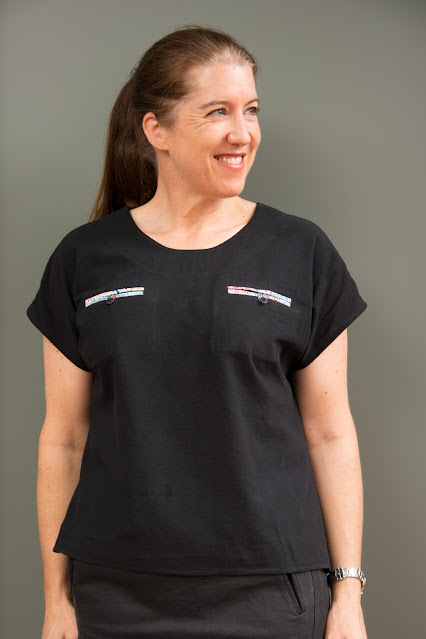 Ages ago, long before I knew how to knit, or knew any expectant parents to knit for, Jorth released her dandelion blanket pattern and I loved it.

I taught myself to knit in the 2020 lockdowns, and my Frocktails co-organiser Lisa kindly went down the baby making route, and so it was time for a Dandelion blanket. 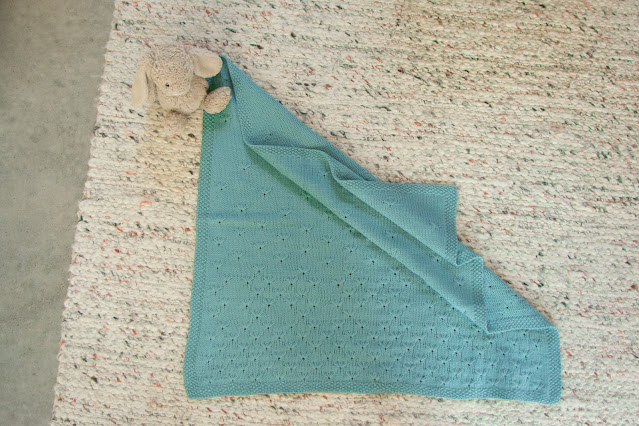 The yarn is Heirloom Mystic 8 ply merino in an infuriatingly difficult to photograph pale green. It looked very blue in every photo I took so I've tweaked the colours so the wool is correct, although my rug is not that "warm" in real life.
I added a bit of extra width to the border around the blanket by casting on an extra two stitches, making the side borders 5 stitches instead of 4 and increasing the top and bottom border rows to 6 rows instead of 4
It came out to exactly the right size once blocked, but I'd run out of yarn far too early. I did a bit of maths and worked out how many extra rows I'd effectively added by doing two extra rows at the start and two extra stitches per row thereafter. I should have been well within the final border but I was still about 10 rows away from starting it. I ordered two more balls of yarn to be sure of finishing safely. 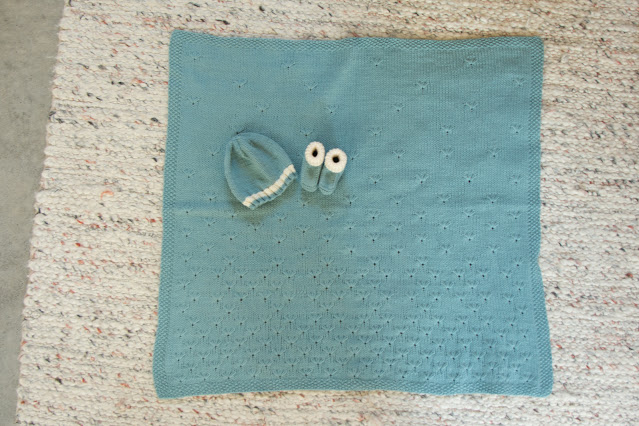 I only needed about 10% of one of those balls, so then  I added a beanie and some booties. Both are free patterns from Ravelry: Basic baby hat by Heather Tucker and Newborn Booties by Priscilla Uloho
There was just enough cream wool left over from Portal the doorsnake for the trim. the booties are the 0-3 month size instead of the newborn size and they look comically long to me! 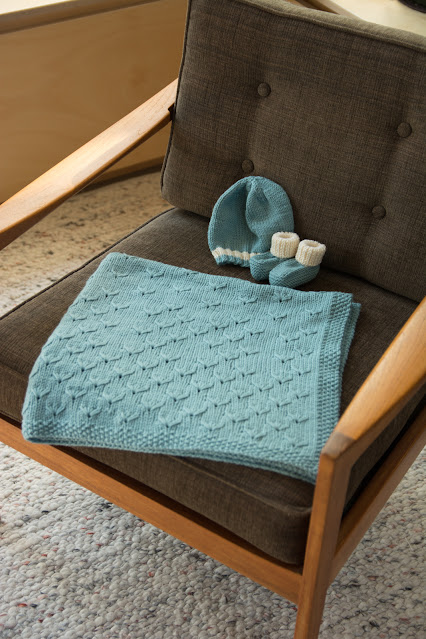