short, shorts, shorts (and one pair of long pants)

When I made her a birthday dress that I was pretty sure she wouldn't wear I also made three pairs of shorts.

That was ages ago but I finally pinned her down for some photos. 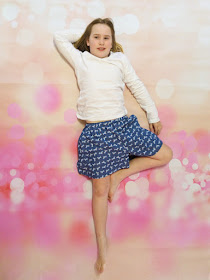 The idea of shorts wasn't a surprise and we went through some pattern ideas together, but then I picked the fabrics and sewed them up in secret.

This first pair is pattern 19/20 (I can't see any difference between the two patterns, it could be one or either of those!) from this book which my translate app calls "Handmade Summer Style" 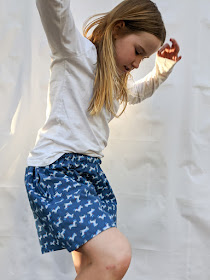 The fabric is the very last of some unicorn chambray from spotlight that had already yielded a dress and a pair of shorts. 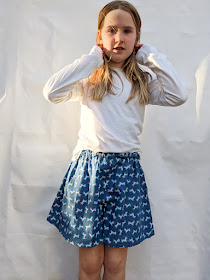 These are simple elastic waisted super-voluminous shorts. She was keen on the shorts like a skirt idea, almost tempting me to try a pair of longer culottes again (they've always been meet with a firm no in the past). 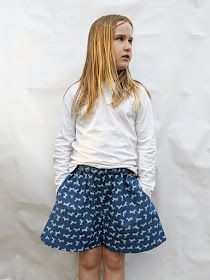 There are patch pockets at the back and inseam pockets at the front. I pulled up my own photographed tutorial to remind myself of how to do inseam sides pockets and still get the seam allowances to lie flat. It's from a different Japanese pattern book and works really well. 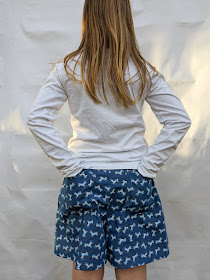 These are size 150 and look like they'll fit forever! I was so afraid of her having grown out of Japanese patterns but perhaps I need not have been :)

Also from the same book is pattern 15. These ones can be made with a bib and straps like overall shorts, or just as the shorts. 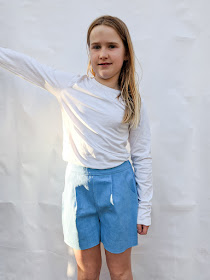 These are my favourites, they're a bit big, but still have a really nice shape. The inner waistband and the legs are finished with facings, so I used a lighter weight cotton for that. 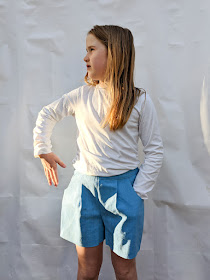 Given that the shorts are denim and heavyish, I also split the pocket piece and created a pocket facing in denim, but the main pocket bag is also shirting cotton. That way the pockets won't take forever to dry in the wash.

Not yet a problem as these ones haven't been worn... 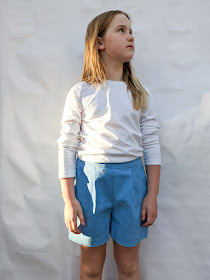 The third pair of shorts and her favourites by far are another pair of Oliver + S Class picnic shorts. 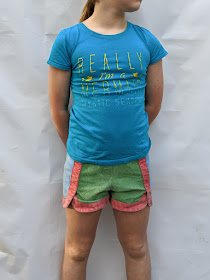 If these look familiar it's because I used the same three coloured denims to make the same pattern last summer. The order of the fabrics is swapped about just to make use of what I had left. these are size 10, same as the recent school shorts. Hopefully they'll last longer! 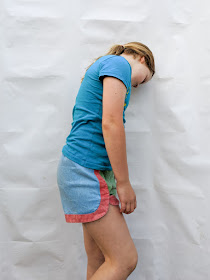 As you can see, this pair have been washed and worn and washed again... 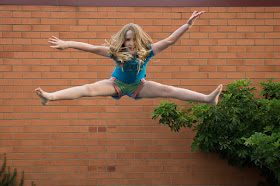 finally, a bit of a flop, but worth documenting all the same.

I tried the Eleanor jeans by Jalie. They're a fitted pull on jeans. I made these with a stretch bengaline kind of fabrics. 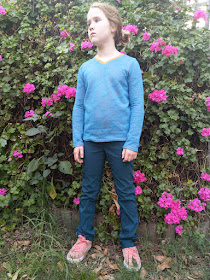 I've made size O according to her measurements which should have had the waist being a bit snug if anything. Turns out the waistband was too big and the rise too short so they constantly feel like they're falling down. 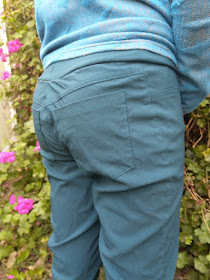 It's maybe not helped by them being very long in the leg and needing to be rolled up. I think they're really promising though...

I'll try and revisit them at some stage, add length to the front and back rise so they come up to her waist and then make the waistband snug enough that they feel secure. I have a few cuts of jegging denim that I'm sure she'd love if I can get the fit right.

Meanwhile I've just done a dart and tuck that has butchered the back of these ones but make them almost wearable when desperate for clean, long pants. 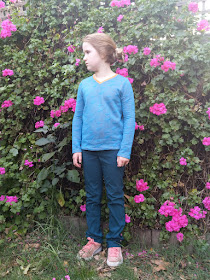 She also scored a birthday bag from fabric that I'd bought for her back when she was about two, but we haven't taken nice pictures of that yet.

Arguably I should be able to photograph and blog about everything since there's not much else we can do right now. But I'm a bit lacking in mojo.

What I am enjoying is crocheting a couple of budgerigars. Seriously. I think they're going to be very cute. We had a pair land in our backyard when our neighbours were packing up their aviary and  moving out. I managed to catch them and we went door knocking until we found where they'd come from. Of course by then, the kids were convinced we should keep them and when I explained we couldn't, A went and found my crochet birds book and insisted I make her a pair of budgerigars.

Shirring elastic for a birthday win

I've been making a birthday dress for A pretty much since she was born and they often go down a bit like a lead balloon. I had no expectations of anything different this year, as she's really not wearing dresses.

So I went with my usual plan of making something I wanted to make. And it worked! 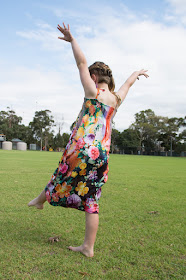 I'd never yet tried using shirring elastic. Which is crazy, because it suits toddler outfits so well. Anyway, we'd been seeing lots of shirred tops and dresses in shops and both agreed that it would be cool to make a shirred dress.

Then, this rayon remnant was on sale at Fabric Deluxe and the light, smooth drapey fabric with its crazy digital print was just begging to be made into a shirred summer dress. 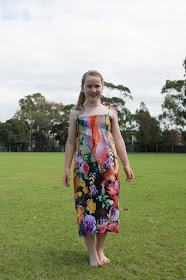 I followed this tutorial from The Sewing Directory only varying a bit with the length and the number of rows of shirring. From memory I used their suggested size 9 width, lengthened to 90cm to make more use of the border print and did 14 rows of shirring. 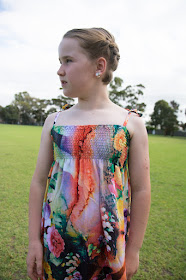 I hadn't thought of how much elastic would be used and had only bought one each of a few different colours in order to decide which would look best. We decided on a bright green, but I had to go back and buy a second spool as it used almost two full spools to do this much shirring. 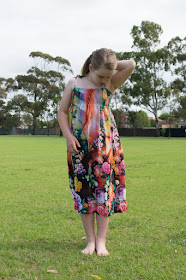 I wound the shirring elastic onto the bobbin by hand, but found it didn't require any extra fiddling or adjusting beyond that. I've just loaded it in, threaded the needle with a matching green regular thread and started sewing lines.

To keep the spacing even I just used the edge of the presser foot as a guide. It looks like nothing is happening for the first few rows, then it starts to really gather and scrunch up nicely. And with a bit of a steam press it suddenly looks completely pro! 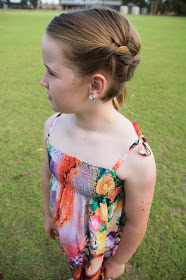 Since the dress wasn't a surprise, and I was pretty sure it might not get worn, I did pull out a few all nighters and sew three pairs of shorts and a backpack as well! All of which are yet to be photographed.

But she opened her presents while a couple of friends who'd had a birthday sleepover were still around and they oohed and aahed over this dress to the extent that I think she started to quite like it herself. 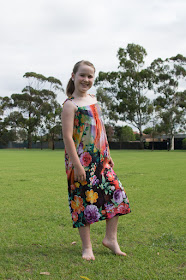 And now I know of a way to make a quick dress out of a remnant of fabric that will fit pretty much any kid. So there's last minute birthday gifts for other little (appreciative) girls sorted! 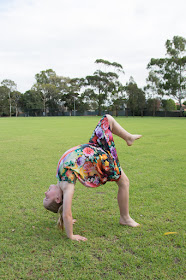