I'm going to keep this brief as our PC is dying and keeps crashing.

As always I've made collages of pictures of everything I made in 2018. Let's start with Oliver + S 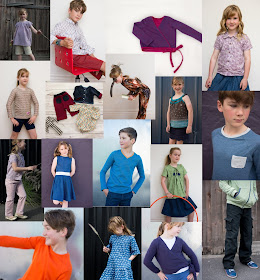 Previous years there have been mulitple collages just for Oliver + S but the kids are wearing school clothes a lot, and A is growing into P's old jeans and shirts and has this taste for grunge...

But, every body needs swimmers and leotards are such fun to make, so this year Jalie patterns go a collage of their own 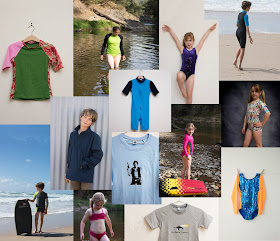 I said it at the start of the year and I stand by it, that jacket of P's is my favourite make of the year. I want one for me this year! (but I have so many other coat ideas... hmmm)

Liesl + Co and Lisette patterns always feature heavily in my sewing, and so here's the collage of garments made using those patterns 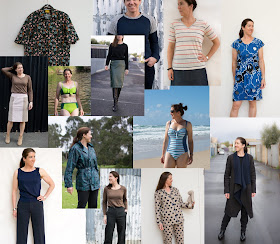 And finally the "everything else" category. Plenty of Vogue patterns for me, a few indie/japanese and Burda patterns for the kids. Odd bits of craft, and one or two other patterns that I picked up along the way 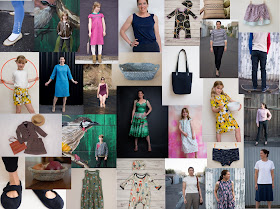 I have plenty of plans for this year's sewing. But, of course, they'll change from one moment to the next so it's a very fluid approach. But there will definitely be more sewing from the fabric and pattern stash.

Using up all the bits is my pledge and so the first garment sewn this year was suitably hideous, made out of gifted purple seersucker. She loves it and that will be up next. First up though, is the annual mountain holiday with it's poolside craft (there's no Secret Valentine Exchange this year - so I put out a call on Instagram for wannabe gift recipients to send me their crafty ideas).

And probably a new PC. Hitting publish before it crashes....
Lightning McStitch at 23:48 4 comments:
Share

I was too busy to get the last of my 2018 sewing on the blog and ready to autopost while I was away on holiday. So let's consider this the last of the 2018 blog posts.

When I was buying the crazy bright (but dulled by bad laundry skills) leotard fabric at GJ's I spotted some amazing Kokka double gauze. It was perfect for my mum... But what to make? Why not pyjamas, and use that awesome Lisette (B6296) pattern I've had for ages. I only insisted on this one photo of my mum wearing them, so mostly you're going to see me swanning about in them - and I tell you, it was hard to take them off and wrap them up to give them away. That fabric {drool}! 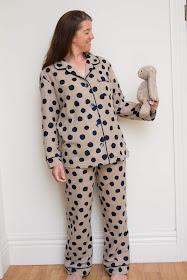 I wanted them to be a surprise so I guessed at the sizing. We have pretty much the same shoulder size and while I measured at the size 14, they were described as very loose, so I went with a straight size 12. On me, the pants are a slightly closer fit than I would choose over my peak butt and upper thigh, but I figured my mum has slimmer (weaker? ;) ) legs than me and a flatter bum so I'd be OK. Turns out her upper hips and low waist were a bit tight and both of us could have done with the size 14 pants for different reasons. After she tried them on I found a bit of extra room in the seam allowances and let them out using her sewing machine. 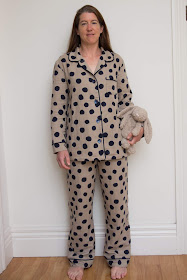 Of course I did consider keeping them for me and buying more fabric for another pair for my mum. But with narrow width, fairly pricey Kokka gauze that wasn't going to happen. For the record, I bought 4.5m and I think I only used just over 4m.

Just before the Christmas holiday I took a trip to Buttonmania to hunt down the perfect buttons. In my head I was imagining an inky, navy, mother of pearl flat button. For the first time, such a button was not to be found. I settled on some perfectly nice navy plastic buttons, then headed to Jimmy's Buttons to get elastic.

Lo and behold, I found my exact dream button and for only 60 cents each! 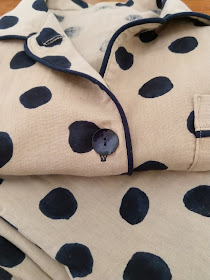 I thoroughly enjoyed the sewing of these and if I was a pyjama wearer myself I would make more in a flash. 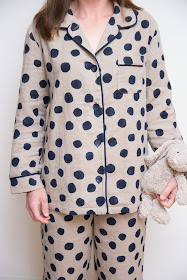 The other thing I bought at Jimmy's was some velcro.... At my gym is a personal trainer who runs small group fitness classes as well as boxing classes. His boxing wraps have been getting a bit of wear and tear and the velcro was coming unstitched. While his own efforts to restitch the velcro by hand were admirable, they weren't up to a sewists standards!

So, during the Christmas break I took all his boxing wraps (20 strips of 4m long fabric with a thumb loop at one end and velcro at the other), and took them out to the country. I removed the old velcro then washed them: 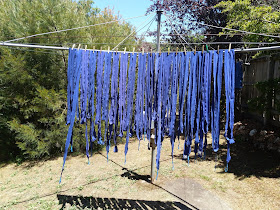 Then I stitched new velcro on and repaired the thumb loops, or restitched the labels where required. 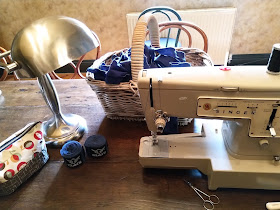 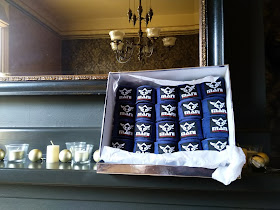 It wouldn't be Christmas without a stencilled T-shirt for my nephew...

I caught up with my brother on the phone and asked him what this year's "thing" was. Turns out, my eight year old nephew is the drummer in a band called The Flying Penguins and is very involved in that. Perfect idea! Only... the one other band member is his next door neighbour Isaac, and it would be a bit weird if only half the band had a T-shirt. That's alright, I can make two! 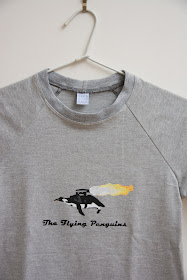 Normally these freezer paper stencil designs are very much one-offs as the hand cutting of each stencil is really laborious, and the stencil gets ruined when it's removed from the fabric.

This year I had borrowed a Silhouette Cameo cutting machine from a friend. I hadn't yet returned it so I thought I'd "cheat" and cut my stencils with that. That made it much easier to do the lettering and to do a repeat and make a second. It's still super fiddly to iron the tiny pieces of freezer paper back in the right places, but at least the cutting was fast. 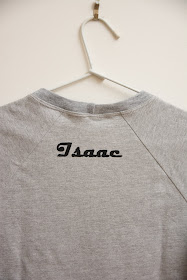 Each kid had their name stencilled on the back. I've never met Isaac, but he's the keyboardist in The Flying Penguins, and I hope he likes his T-shirt.

I used the Jalie 3669 Nico raglan T-shirt pattern and chose their sizes based on their age (and the fact that it would be correct for my two and I could then re-use the tracings!). All of the fabric, the matching ribbing, the cute KATM "this is the back" labels, and the fabric paints were already in my stash! 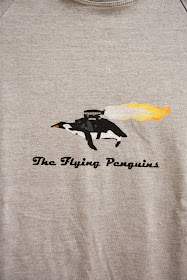 My nephew has hardly taken his one off since Christmas morning and I think he's pretty excited about returning home and gifting the other one to his friend.

The other person who seemed pretty happy with their T-shirt was A's grade 2 teacher. When I asked A what he liked the answer was "the colour blue and Star Wars". How about a stencilled T-shirt I said. Great, she said. 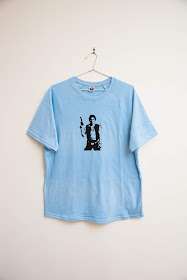 Again, the fabric was in the stash, and amazingly, so was some perfectly matching ribbing in the pile of things I retrieved from TopbikePhysio's mum (the gift that keeps giving).

I found the Han Solo stencil on the internet, cut it with the Silhouette Cameo and then A did the painting. We added one of KATM's "I Made It" labels just in case there was any doubt! I guessed at the size, sewing the larger of the two sizes marked as M on the Jalie pattern. It looked huge and fit Flipper quite well (yay for having another traced pattern ready for the family!) and he would usually describe himself as a T-shirt size L. 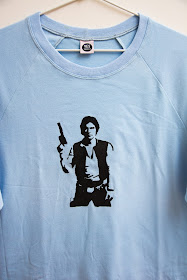 Finally, I helped P make a gift for his teacher. He had recently discovered some basic origami patterns and then I taught him an Iris flower pattern that I'd learned years ago. He became super keen on making them and I wondered if enough of them, sewn together, might not make a nice Christmas ornament.

I bought him some metallic paper in green, red, gold and silver and he got started.... He calculated he'd need to make about 26 flowers (with some clever circle volume maths), but then I complicated things by suggesting we stitch them through a styrofoam ball to give it more structure. 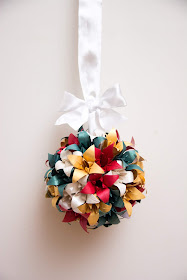 That worked beautifully, but he ended up making almost 60 flowers in order to cover the ball! his teacher was super impressed, but mostly he impressed himself, and that's what good gift crafting is all about in my opinion! 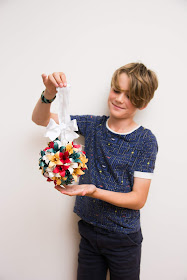 I hope you all had a lovely Christmas and happy start to the new year. I need to make my picture collages of everything made in 2018 next...
Lightning McStitch at 21:49 1 comment:
Share
‹
›
Home
View web version