Ah, Kid's Clothes Week. Sometimes I go nuts, sometimes I barely do anything, but I can never resist dedicating some time in that week to sewing for the kids. Actually that's most weeks really, but this week I feel a little bit less alone in my obsession!

I had only one thing I needed to make this week and it was a costume/dress/outfit for A to wear to a Mermaid/Under The Sea themed birthday party. She's there now, swimming and swanning around with her mer-gal-pals so, let's check out how completely carried away I got... 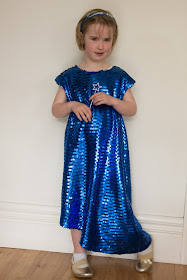 I was out at Eliza fabrics in Sunshine looking for something else entirely when I spied this electric (or ocean?) blue sequined fabric. At $15/m I figured a 1m cut could make something and wouldn't be too expensive a failure. I'd never sewn with sequins before and I tried a little dig for advice (or even good humoured conversation) from the attendant at Eliza fabrics but got nothing - I might make it my mission to crack a smile from that lady.

The choice of pattern, however was easy: The Roller Skate Dress by Oliver + S
It elected itself by virtue of only being two pattern pieces, being a super quick sew (yeah, more on that) and having a lining to keep it from being a scratchy, nasty mess. 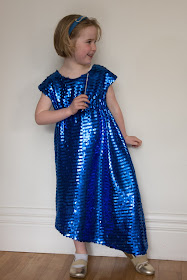 The mer-girl was dead keen on an off the shoulder, one sleeved design (oh I have created a monster) but since this fabric had no stretch I had to talk her out of that. We compromised instead by making the skirt asymmetrical and kind of reminiscent of a fish tail or perhaps dolphin shape.

The dress is a straight size 6 with about two inches added to one side and about 8 inches on the other side. That meant tracing the pattern onto the back of the sequin fabric (standard kids chalk works really well for that) and cutting it single layer. As I cut, using the good scissors mind you, it became obvious that sequin sewing is a whole new world of complicated. 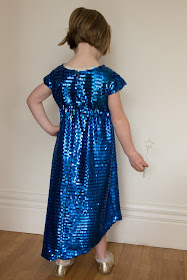 So, what was going to be a 2 hour sew turned into a whole week of evenings spent snipping sequins out of the seam allowances and I suspect I will be vacuumming up bits of blue sequins for many months to come.

I was correct in one thing. Once you've prepped your pattern pieces, the Roller Skate dress really is a lovely, quick sew. 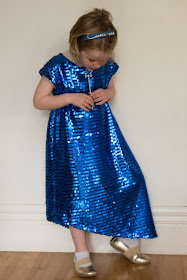 But then the elastic casing, which should take moments to stitch had to be stitched by hand from the lining side. Each stitch picking up just the net backing of the sequins to create the channel for the elastic but not interfere with the lay of the sequins. Between that and hemming the outer skirt it was another long evening.... 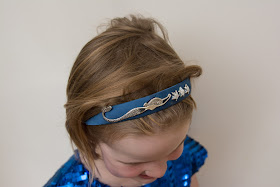 To "mermaid" things up a bit more I decided she needed a seashell headpiece. I went to Feeling Inspired for some shells and a headband. He didn't have any shells but suggested this silver mermaid, which he then bent to shape to fit the headband and cut the hanging loop of her tail fin. Then he went and got some little sea stars to finish the look. I sauntered off to find some other things for myself and in the end I was charged only for the bits I chose. The headband, mermaid and box of stars were free! I can see star embellishments going on everything as there's plenty of them!

The headband was black, but I had a bit of the lining fabric left so covered it and glued the fabric in place. Not a neat as it could have been but I was way past any more handstitching at this point. 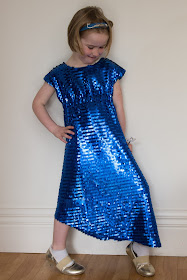 After all that extra effort I'm glad it doesn't look too costume-y as should she happen to get an invitation to a disco or evening gala, she's got the frock!

Hopefully it's held up to the rigors of a kids birthday party and won't come home in tatters.

It's already been tested in action against a photobombing big brother! 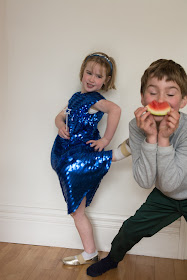