Some time ago I found myself in Spotlight, with no children, no time constraints and in the midst of a $5 Vogue pattern sale. (nice, huh)

A Koos Van Den Akker coat pattern made it's way into my shopping basket, and when The Dressmaker's Do was announced for a wintery June night I knew I had the perfect coat pattern to make. I had already spied the fabric I wanted at Tessuti back when I was looking for the right fabric for my frocktails dress. 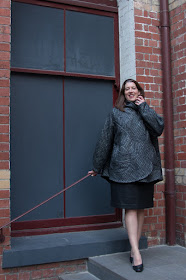 This is possibly the thing that I've made to date that I invested the most amount of time and thought into. It was certainly the greatest investment of cash to date! So forgive me a long blog post...

Here's the pattern cover in all it's Koos kookiness

The pattern suggests no less than eight different fabrics and the pattern pieces are simply the weirdest shapes. Koos Van Den Akker described this as his "oil slicker" jacket and there's a great video here of him talking about designing it.

I knew I wanted my version to be a bit more "subdued" by virtue of being all in one fabric. Yet I still liked the idea of the grainline variation that would come from cutting all the separate pattern pieces.

First thing to do was make a muslin to check the fit (yep, it's oversized and so "fit" is hardly the word) and construction. I bought some cheap sweater knit and a chevron stripey knit and set about making a basic test run. I got the idea from JillyBeJoyful blog to make the lining as inner and outer to get a "quick" version of the coat and check for fit. 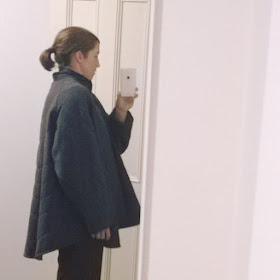 And I loved it! It's dramatic, it's wide and swingy, it has a crazy high "snow white" style collar yet the one part that needed to "fit" that is; across the shoulders, was perfect!

To make the trial run I traced off just the lining (called contrast 1 I think) and sleeve pattern pieces. This pattern has nine or ten (I forget now, but it was an insane number) sheets of pattern tissue. To make the lining body piece four pattern pieces are joined. I traced them onto the thin interfacing that I use for pattern tracing then sewed the pieces together with the sewing machine 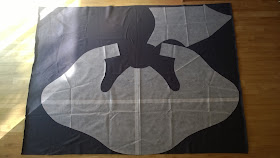 With those two pattern pieces you could have a really quite quick and easy coat and I'm very tempted to make up another everyday version in this way.


Once I knew I was happy with the size I set to work tracing all the other pattern pieces and working out what the absolute minimum fabric requirement was if I was to make the entire outer coat from one fabric. I laid out all the pattern pieces on the floor and played pattern piece tetris for a good couple of hours. The final figure was 3.2m of a 145cm wide wool coating. The lining could be cut from only 1.5m if the fabric is wide enough (1.5m wide) to position the sleeves as above, otherwise it's closer to 2m 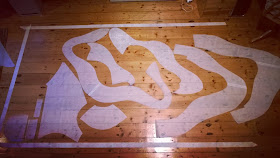 The fabric that I'd fallen in love with is an Italian metallic wool coating and it wasn't cheap. I purchased the 3.2m, but it wasn't in stock and so was posted to me a few days later. I never measured the final cut as it arrived, but after I'd cut my coat I had a bit over 40cm spare - a fancy coat for A perhaps? Did I mis-measure or was Tessuti generous with their cutting? I don't know but since it's $40 difference I'm hoping it was the latter! 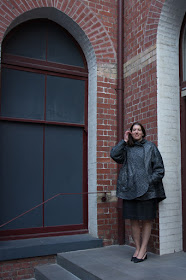 Once I had the "good fabric", I thought I'd better work through the pockets and so I added them to my sweater fleece version. 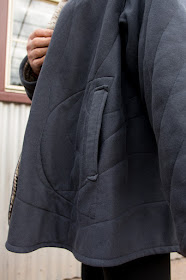 The pockets are "patch pockets" in that they are added after the whole coat is constructed and then a very neat and moderately tricky welt is sewn. The pocket is formed on the inside and it has it's own, simpler opening, so the jacket is truly reversible.

I quilted the practice run jacket as I was worried that without the quilting the weight of the fabrics might cause them to sag and hang apart from each other. Big sweeping free motion quilting was kind of fun and with the walking foot the fabrics didn't get pushed around or shift.

When I was in Tessuti getting my fabrics I spotted the perfect metallic grey bias binding. Perfect that is except for the width. It was about 3/8 of an inch too wide. so I ironed flat, trimmed and then re-pressed about 10m of bias binding! 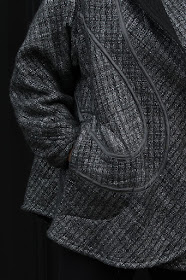 The coat panels are joined with wrong sides together, the seam allowances then trimmed and pressed flat, and then covered with bias binding. Such a beautiful finish which really isn't necessary since the jacket is lined and you'd never see the seam allowances anyway! That's my kind of sewing, technically demanding and excessively well finished! 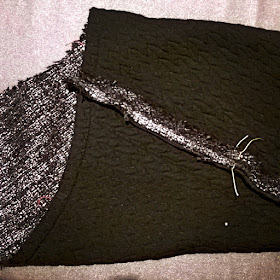 The sleeve has a twisted, and slightly curved, seam which is sewn after the sleeve outer and lining have been quilted together.

Then the sleeve seam, and all the other construction seams are flat felled. Doing a curved, twisted flat felled seam down into a sleeve is not easy, but with plenty of pushing and poking and short bursts of stitching only about an inch or two long and I got there.

And it's worth it. Flat felling all the seams leads to a beautiful, reversible coat! 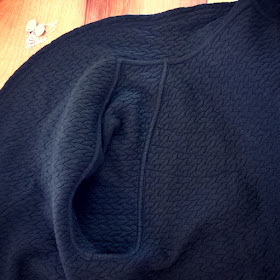 The lining fabric that I chose is a basic cotton/synthetic knit with this nice faux quilted texture. It makes the jacket slightly more casual than it might otherwise have been, and by using a "grippy" knit rather than a slippery lining it's easier to keep the coat closed and on my shoulders 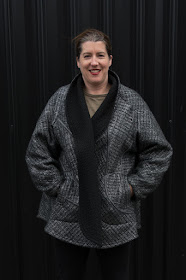 The combination of wool coating and knit lining makes it the warmest, snuggliest coat ever. Like wearing a giant, very fancy blanket! 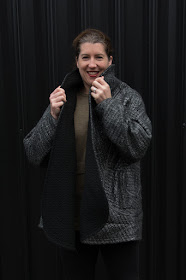 On a windy day such as it was taking these photos, the jacket does tend to fly open, so I've been using a big kilt pin to keep it closed. 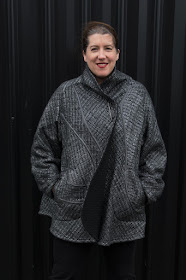 Or it can be worn with the collar turned down 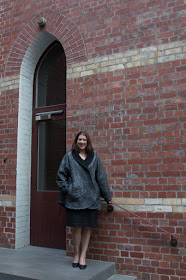 When I'd chosen the fabrics for my trial run I didn't really have myself in mind. I was making one for my mum! Yep, she scored the casual version and I'm happy to say she loves it 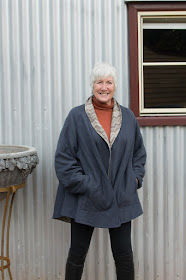 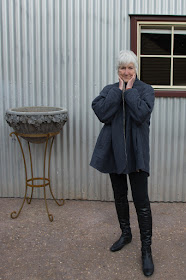 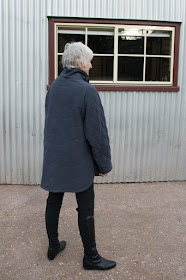 And it seems that grandmothers and their granddaughters have at least one thing in common...

They love to twirl! 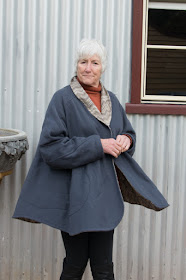 The pattern is rated "advanced", which of course I hadn't noticed until I was well and truly into it. It would be possible to make it "easy" by doing it as my trial run with one piece, and maybe even leaving off the pockets or making non welt patch pockets.

But, having said that, the Advanced tag might be a bit of an overstatement. If you can apply bias binding, flat fell a  seam and follow a welt pocket instruction (which I thought was very well explained) then you're cruising. Just try and pay someone else to trace all those pattern sheets for you! 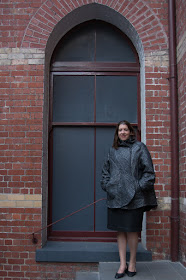