Birthday Gifts: Of Pokemon and Poo

There's been quite a few birthday parties recently for the kids to attend. While some necessitated a costume (oh those sequins), others just inspired me to sew/make something 'cause I really like the birthday kid.

First up, was P's best buddy who is also a Pokemon fan... 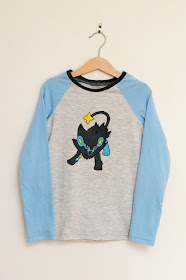 I set the kids to the task of finding out which was his favourite Pokemon. It was Luxray, which of course meant nothing to me, but since P has an encyclopedia of Pokemon characters we were set.

The image in the book was a bit too small so we scanned it and enlarged it before reprinting it to trace and cut a freezer paper stencil. 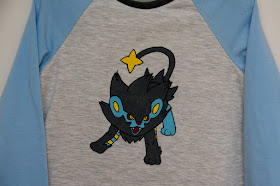 Again, I've used the freezer paper stencil to provide the blocks of colour and the overall shape, then added the black line detail by hand once the base colours were dry. I really enjoy painting these!

The T-shirt is, of course, the Oliver + S Field Trip Raglan T-shirt.  I guessed at a smaller size than P's current one and used the pattern I had traced from P's Yoda T-shirt which was around this time last year.

It was happily received and put straight on... At which point I realised P was wearing his Pokemon T-shirt too and we needed a photo of the two of them! 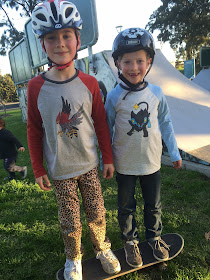 The birthday party we attended today was for a little girl who's just a bit younger than A. We only see her occasionally as they live half in Australia and half in Europe. I wasn't sure what she was "into" re a birthday gift, and so asked her mum.

The reply was "$2 shop stuff, hand me downs, handmade stuff, poos and farts"

Ok, I can work with that... Farts first: 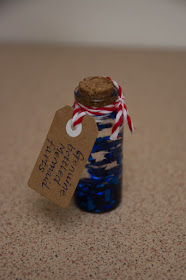 The kids had convinced me to let them keep all those little bits of snipped blue sequins, and shhh, don't tell, but that's them suspended in paraffin oil pretending to be bottled mermaid farts!

A handsewn poo seemed like a fun challenge too. The fabric stash buckets (which, by a happy scatalogical coincidence are the old nappy soaking buckets!) yielded a variety of brown fabrics and we had a family vote on which would make the best pet poo. 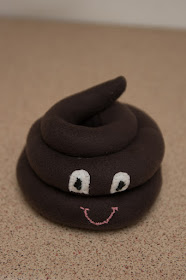 Working with the fabric scrap I cut two 3" wide strips and joined them to make a strip about 70cm long. This poo was cut on the bias as that was the only way I could get sufficient length. I've since cut and sewn another which was on the straightgrain. I'll leave it to another sewing blogger who cares more than I to write the dissertation on bias vs straightgrain poo sewing. :)

Anyway, it's just a case of sewing a long, tube that tapers at the closed end, turning it, stuffing it, then rolling and handstitching it to achieve the perfect plop. 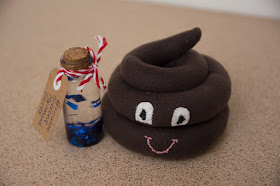 This pet poo is really quite endearing. When P saw it the morning after I'd sewn it he looked rapt. He picked it up, petted it then gave it a little kiss. :) Of course he then realised he'd kissed a poo and laughed his head off.

From the birthday girls response I think it's going to get plenty more cuddles and kisses in its new home!