As a birthday/mother's day gift to me I bought a couple of new Japanese pattern books and half a dozen of the Stitch Idees embroidery magazines from amazon.jp

There was a genuine need to make a washable, everyday jumper/jacket for A and I was taken with a couple of patterns from Neat and Lovely Girl's Clothes.... 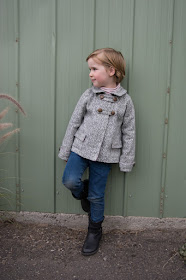 I have some lovely green wool that I bought way back when she was born which has always been intended for her first School Days coat, but has now been cut up to make a different coat altogether.
But first I wanted something a little more carefree than a wool coat. Spotlight was having a 30% off sale and so this "platinum fleece" was picked up quickly and cheaply and immediately sewn into this little jacket. 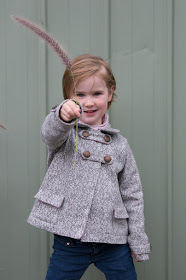 It's delightfully soft and fleecy on the inside, so I was happy enough to relax my fussy standards and not draft a lining. The jacket pattern has a facing, and the pattern instructions appeared to suggest a nice, contrasting fabric. I say "appeared to suggest" as I don't understand a word of Japanese and sew purely by referencing the wonderful diagrams and a bit of guess work.
For my facing and the undersides of the button tabs I chose a little leftover remnant of a pink/grey knit that I've now completely used up. It's cute that you just see it peeking out from under the pocket flaps too. 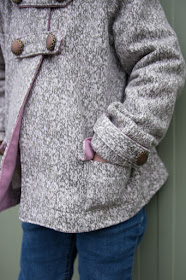 I confess I chose the pink as a bit of insurance that she would hopefully like the jacket. I wasn't sure that the olive/grey fleck would appeal, but happily she's completely sold on this one. Perhaps it helps that the little buttons came from a wonderful excursion into the backrooms of Buttonmania on a day when the warehouse was open. She could stick her hands into carton after carton of buttons and we collected a great number and paid for them by weight. A wonderful bargain! Luckily I happened to have picked out exactly six of these ones.﻿ 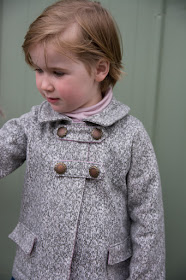 The buttons aren't functional and the jacket is closed with sew in snaps. I followed the pattern and hand sewed plastic snaps under the buttons on the left side (as worn), but it didn't look secure enough and was threatening to hang oddly, so I added a couple of snaps from my snapsetter which are hidden under the centre of each strap.
I wish I'd thought to use snapsetter snaps within the button tabs as I constructed the tabs 'cause they close much more easily and securely than the sew in type. Next time.
﻿ 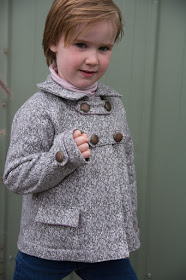 The collar looks a bit sticky-uppy in that photo, but it mostly lies very nicely due to being constructed of two different pattern pieces. Of course having to draft the jacket, facings, collar pieces, pockets and tabs and add seam allowances to the lot was a days work in itself. But I think the finish is really nice and looking at that sleeve length I won't have to trace the next size for a while!
I have become quite a fan of Yuki Araki's sewing patterns. I feel they have a level of tailoring and design that makes them much more finished and lovely than you might perceive or expect a Japanese sewing pattern to be. This book, Neat and Lovely Girl's Clothes was reviewed on Japanese Sewing Books blog and thankfully Yifarn has taken lots of photos of all the patterns. Go take a look, it's a book choc full of gorgeous patterns. 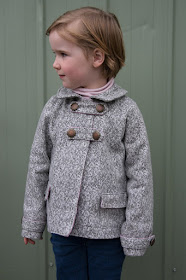 ﻿I don't often think about the cost or cost savings of making my kid's clothes. I just do it because I enjoy doing it. but when a little jacket like that can be made from about $8 worth of fleece, maybe $1 worth of buttons and some leftover bits then I feel pretty happy about my hobby!
And I'm pretty happy with my little model! She was totally into the idea of a photo shoot, has been regularly declaring that she loves everyone, that I'm the best mum in the whole wide world and is just generally being incredibly positive. I hate to wonder how long it will last, but hey, while she's declaring I'm the best mum I'm totally on board with her being the best daughter in the world! 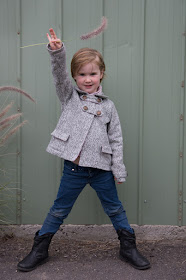