A Carnaby Cape for my mum

When I found this gorgeous double faced Italian wool coating fabric at The Fabric Store I knew it would be perfect for a Carnaby Cape.

But,... I already have one and so I bought some of the fabric ('cause it was half price!) and stashed it away for a mother's day gift. Well I was a little late due to all that cross stitch, but on the third Sunday in May my mum got her winter cape. 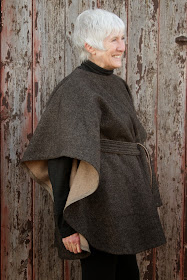 Against black clothes it's looking quite brown, but it's really a kind of charcoal grey/brown and the main side has a soft, cuddly face almost like a cotton fleece. The reverse side is a true camel colour and has a slight herringbone pattern to it. It's thick, warm and divine. The kids would happily have kept this fabric just for rolling themselves up in.

To show off the double sided nature of the fabric, the Carnaby Cape seemed the perfect choice.  However, I didn't get my fastidious approach to tasks as a gift from aliens. It was most certainly inherited. So, if I was going to sew for my mum it was going to have to be good enough and there'd need to be some alterations to the finishing of the cape. 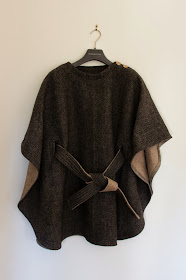 Also, due to the two sided nature of the fabric it wouldn't allow for the hem to be left raw as per the pattern. It was going to need at least hemming in some way. I hunted through my stash to see if I had a suitable fabric and discovered that a pewter/bronze striped linen was perfect if I used the reverse side.

Then, with the childhood memory of the phrase "that's lovely Shelley, but it's not your best work is it?" ringing in my ears I set to work. (I'm having a bit of a laugh here as I never had any pressures as a child that weren't self inflicted, but then there were no prizes given out for half arsed efforts either) 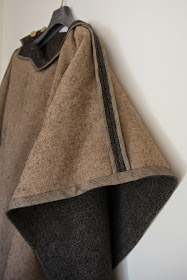 So I finished the shoulder seams with bias binding.... 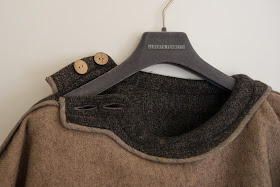 .... and all around the front and back facings and button tab too. Don't ask me how, but both times I've made this cape I've managed to get the buttoning side reversed. It's meant to button on the right shoulder not the left. I cut the facings the wrong way up then have to imagine all the instructions in reverse. It would surely be easier to get it right from the start. For reference: Cut the already block fused facing pieces form the fabric right side up!

The buttons are actually the same decidedly brown buttons that I used for my cape (I'd bought 4 when I only needed 2) but when used upside down they are perfectly camel coloured. 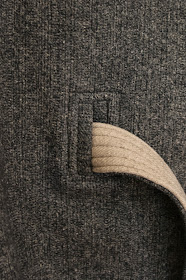 The bound buttonholes really are lovely to sew. Knowing that the cape wouldn't be lined like my one is, I paid more attention to the insides and was careful not to use too large a piece of interfacing that would stick out beyond the welts. Again for reference; 6x8cm rectangles of interfacing are perfect.

To highlight the double sided fabric I cut the belt from two 10cm wide strips instead of 1x20cm wide strip. I folded each strips long edges to meet off centre. That way, when I put the two strips together I can offset the joins so that there isn't a weak spot or ditch in the centre of the belt.

By this point I was quite pleased with how the insides were looking, so of course I couldn't leave the edges of the bound buttonholes alone and have them ruin the show... 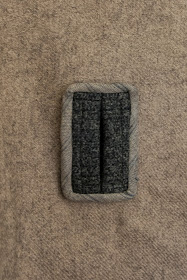 I was apprehensive that stitching from the inside might result in some very wonky rectangles on the outside. But since the welts were nicely centred, when I stitched in the ditch to hold the bias binding in place it turned out to be as good a topstitch around the welts as if I'd done it from the cape's right side. Phew.

This wool is a bit heftier than mine and doesn't drape quite as softly. But hopefully, out in the country, in the middle of winter it will be an easy thing to thrown on to brave the cold outside.

And speaking of brave.... thanks to my mum for making her first modelling appearance on the blog. It's kind of a condition of receiving anything handmade that you have to wear it for a blog photoshoot. 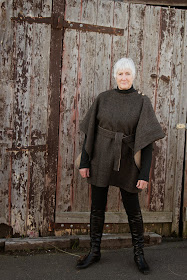 She did a great job modelling, don't you think? 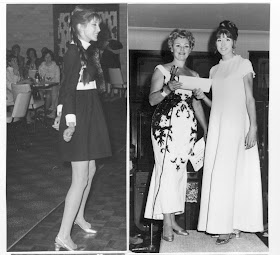