Little Things To Sew Cover to Cover Challenge: Lynn over the line!

That's right! We have our second finisher in the Little Things To Sew Cover to Cover Challenge.

Lynn, known in the Flickr group as Mile571acr has completed all 21 projects. Here she is to introduce herself and respond to my finishing line interview questions:

My name is Lynn from Carmel, Indiana and have two granddaughters, ages 3 and 2.  When I brought "Little Things to Sew" home both of my daughters said, "Please make one of each project!" The sewing challenge was just the right motivation to make it happen! Several of the projects I have made twice already (Puppet Theater, hood, scarf and gloves, bucket hat), so you will be seeing more posts as I complete the projects for both girls!

Q: As a sewer, what was your favourite project in the book?
The Penguin Backpack. I’ve never sewn a backpack before and thought it might be a difficult project, but it actually came together very quickly! There are so many cute variations that are possible with this too! So far I have made two, but I can see more in the future!

Q: Which project was the favourite from the kid's point of view?
The tutu was the biggest hit – my granddaughter’s face lit up when she saw the pink tutu. She put it on and twirled around until she fell !!

Q: Were there any projects that you found difficult or got stuck on? If so, why?
The bento box was a little more difficult to do - not from a construction standpoint, but my sewing machine doesn’t love stitching on laminates...

Q: Were there any projects that you wouldn't have made except for the Cover to Cover Challenge and the need to make them all? Which one(s)?
I probably wouldn’t have made the Bear Bath Mitt. It is cute, but neither grandchild uses a mitt in the tub!

Q: Would you be happy, uninterested or horrified if there was ever a Little Things To Sew Volume II?
I imagine like most people who have ever completed one of Liesl projects, we would all love to see a Volume 2 of Little Things to Sew! Should we start an email campaign?

Q: And finally, what's next?
I am making some little treat bags from Nana Company for Easter, then back to my Oliver + S patterns for some more garment sewing! I am excited for the new layette patterns with a new granddaughter coming in a week or two.

How exciting. I for one look forward to seeing you sewing everything over again for a third time!
When Lynn first started adding photos to the Flickr pool I was impressed not only with how fast the projects came but how beautiful each one was. For me, Lynn's Playtown was an absolute stand out that has me rethinking my previously vague plans for when I make it. Here are examples of her projects from the Flickr pool in a mosaic 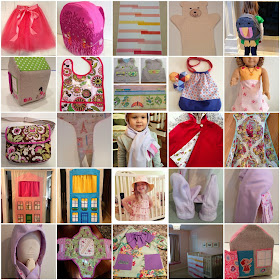 Thanks for joining in the challenge Lynn and congratulations again on such wonderful sewing.
I don't know if you need a blog button, but perhaps you could print it onto a T-shirt transfer and wear it with pride!


With April under way I've updated the PDF so everyone else can see where they're up to. I've just made some bibs that I've gifted to another 1 year old and I have a Red Riding Hood cape cut out so there are my projects for April. What are you working on?